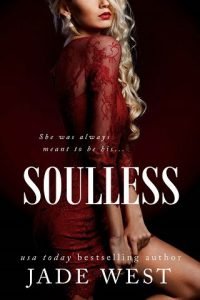 I was one of those girls who used to think about it late at night – being kidnapped by a monster. There was a strange dread and fascination with being owned by a beast. It was no different in real life, walking away from my apartment complex at the side of Lucian Morelli, the evil knight of my world.

He didn’t speak to me, because no words were needed. I knew he was my god from here on in. I was nothing more than a little toy doll in his sadist show. That’s what he was. A sadist. A sadist who wanted my blood.

I had no doubt he’d be taking it, slowly and painfully.

I was the one who broached the silence, making sure we were far enough away from the latest passersby so they couldn’t hear my voice.

“Where are we going?”

He could have told me it was none of my business, and I’d have still followed him. I had no choice. Not while my best friend in the world was being held for ransom if I didn’t obey Master Morelli. Tristan’s life was worth more to me than mine.

“We’re going to get a cab,” the monster said, just like that.

We could have called one via cell easily enough, but I guess he didn’t want to. The anonymity of a taxi rank must have been a more appealing option. It made sense. A Morelli with a Constantine in any form would be criminal in our world.

Lucian didn’t look over at me. His eyes were fixed ahead of us, glittering in their darkness. His jaw looked as firm as ever from my angle, looking up at the beast. His pretending to be Terence Kingsley way of dressing couldn’t disguise the evil in his stare. Button-down shirt or not, Lucian was glistening in his Morelli evil.

It occurred to me for just that second, trotting alongside him on the sidewalk, that he was as unsure of how things were panning out as I was. It seemed odd that he was acting on impulse, totally out of character with the way he usually reeked of control and structure.

Yeah, he was out of his comfort zone. The thought made me smile a little, even in my crazy fear.

It happened to be the moment he chose to fix me in his stare.

“You won’t be fucking smirking when we’re home and dry, little girl.”

It didn’t stop me smiling. Even now, with the mind-spinning promise of fate ripping me out of this world, there was a beautiful sense of relief in my soul.

Yes. Lucian Morelli would be the end of me. Yes. The end of me would be welcome, once and for all.

“Maybe I will be smirking,” I countered. “Maybe I’ll be happy when you kiss me my final goodbye. I was about to end my own life, after all.”

I thought back to the bottles of pills I’d left behind and how he’d disturbed me from them by turning up at my apartment door. He still had the Tristan suicide note I’d written in his inside pocket. It was typical that he’d used it to work out just how important Tristan is to me.

“You’ve had plenty of chances to end your life, little girl. You didn’t. Even tonight you were waiting for the big bad wolf to come and take you. You’re lying to yourself.”

I stopped walking and folded my arms across my chest.

My heart leapt a little as he turned to face me and stepped close. He loomed tall. His voice was barely more than a hiss when he spoke.

“It’s not your right anymore, Miss Constantine. You can wave that fucker goodbye. Your life belongs to me now.”

I belonged to Lucian Morelli. “Ha!” I couldn’t help laughing in his face.

But he didn’t laugh back. He didn’t even flinch. He held out a hand, and I looked down at his outstretched fingers, so big and firm. He was so big and firm. It felt weird to take his hand in mine. The power in his grip was . . . intense . . . My heart leapt again as he pulled me along with him.

In that moment, hand in hand on the sidewalk, we must have looked like any regular couple enjoying their evening. If only we were. If only we’d been two people meeting each other at a party and wanting to fuck. If only we’d been two people drawn together without our family war gripping us tight. It was a bizarre truth how instinctively I hated the man holding my hand, and had done since I was old enough to understand his name.

Constantines versus Morellis. Brutal enemies through the generations. Malice to the death.