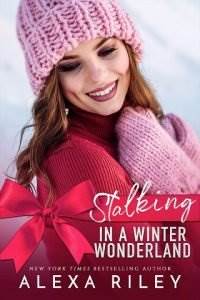 Some of my hair has fallen into my face, and I blow hard on it to try and clear it out from in front of my eyes. How can I put on the biggest events without missing one detail, but I can’t get myself together?

“On your head,” Jewels says as she places a hot chocolate on my desk and keeps walking.

Reaching up, I feel the glasses I’ve been searching for and sigh in relief as I take a drink of the treat she’s brought me.

When the temperature changes, Jewels usually goes out once a day to get our drinks from the local café. It’s only a few blocks away, and even though their drinks are pretty good, mine are better. I’m not trying to be snotty, it’s the truth. I take it seriously since my mom taught me how.

I get back to work checking that everything is in order as I go down my list. I’m a list checker by nature and make one every day. It’s how I never miss a detail. It’s also the prime holiday season, and we are busier than ever.

We spend months preparing for this season, and some of these parties are such grand events that we’re still cleaning up one as we begin another. It’s a lot of chaos in a short amount of time, but it’s my absolute favorite, so I can’t say I would change it.

“Have you made a decision yet?” Jewels asks, popping back up next to my desk and making me jump.

I let out a long breath. “Is he serious?” I start to push my glasses up into my hair, but Jewels smacks my hand.

“Leave them alone, and yes he’s serious. You should do it,” she pushes.

“We get a lot of crazy requests, but I thought we drew the line at hookers.”

Jewels rolls her eyes. “He only wants a date, and he wants that date to be you.” She wiggles her eyebrows.

We have a few new clients this year since Jewels has expanded the business, and I was given those clients. One of them asked if I was able to attend the event, and I told him I’d be there because it was part of my job. A few times I’ve had to fill in places where someone called in sick, but that’s just part of the job.

Later I found out that he didn't want me working the event; he wanted me to be his date. I laughed at first until I realized he was serious. I told him I couldn’t because we were technically working for him, and he said okay. I thought that was the end of it because Rick Victormore the III is kind of a jerk. I think he was taken aback when I didn't jump all over his invite because I’m just some commoner that doesn’t want to date him.

“Because you live like a nun. Someone would have to hit on you in the baking aisle in the grocery store. In fact, I bet someone has and it went right over your head.”

More often than not men have stopped and asked me if I thought this or that would work best for a dessert. Was I being hit on? As I try to think about it, Jewels laughs at me.

“Last year when you drank that spiked eggnog, you said, and I quote”—she claps her hands together, blinking in a dreamy look and trying to impersonate me—“‘I want my first kiss to be under the mistletoe. Then he’ll whisk me away and ask me to marry him on Christmas and I’ll have a snow baby.’”

Before she even began, I had my face buried in my hands and I was already turning red. After that night I had a killer headache, and I haven't touched eggnog since.

The most embarrassing part is that at one point it was actually what I wanted. It might have been this fairytale idea I had in my head, but once I lost my parents, things changed. Christmas was a big deal to my parents before I lost them. I was in my last semester of college getting my Bachelor’s in Hospitality Management when they passed, and now that I don't have anyone to celebrate with anymore, I try not to think about that silly dream.

It’s also why I love this job so much. I get to be a part of so many Christmases, and even if they're not really mine, I have a hand in them.

“You should go. What’s the worst that can happen?”

I’m not sure, but knowing me, a lot. But I guess if I never put myself out there I might never find the one. I want to have what my parents had; I’m just not sure it’s possible. Their love for each other was like a fairy tale, and in some ways it’s kind of good they left this world together. I’m not sure either would want to be here without the other.