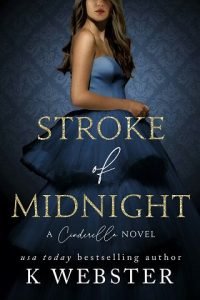 The silence is bliss.

No murmurs, no laughs, no bullshit.

A sense of pride washes over me when they all yield to my simple demands. It’s what keeps the wheel greased and moving efficiently. We’re not a Fortune 500 company and one of the world’s most prestigious acquisition firms for nothing. It takes an iron fist to keep everyone in perfect submission. All because they obey my one golden rule.

I reward them handsomely for it, too.

Halcyon requires everyone to play by the Constantine rules—by my rules—in order to maintain the utmost control over this godforsaken city.

The one-thousand-seven-foot skyscraper Halcyon Building is more than the hub for a multi-billion-dollar firm but is also the home of three five-star restaurants, a bar and cigar lounge, a state-of-the-art wellness spa, three elite residential floors, and a rooftop private terrace. It’s one of the most revered and admired pieces of architecture in New York. We’ve been in every architectural magazine, and a movie was even once filmed here.

This building is our proverbial balls.

The Morellis only wish their presence in this city were anywhere close to ours. No matter how hard they try to claw their way out of the gutter and dress up to fit our world, they’ll always be rats in fucking suits.

But, because I own them too, they indulge me despite whatever laws they were trained to follow.

Our four secretaries that assist the executive offices follow the strictest guidelines. Namely, confidentiality isn’t simply a request, it’s a necessity. We have too many rats in this city waiting for a crack so they can weasel their way inside. It’s my job to know everything about everyone who works beneath me to make sure they’re solid, and I don’t take well to vermin.

I reach the last desk—each one angled perfectly and aligned the way I like—and wait for my secretary to end her phone call. As soon as she’s done, she plasters on her veneered grin and hands me my coffee. Black and piping-hot with a dash of nutmeg.

“Your brother. Perry.” Ahh, Perry. Still sucking on Mother’s tit like he can dip his hand in her deep, deep purse and pull out whatever the fuck he wants whenever he wants. Silly boy. “He said he’s been trying to reach you. I asked if he’d like to set up a meeting, but he declined. Though, he used far more colorful words than I thought were necessary.”

Baby Constantine hates when he’s pushed aside or ignored. I blame it on Mother’s nanny, Ivory. The woman never could have children and treated Perry like he was hers. He’s spoiled as fuck, and that’s saying something coming from our blood.

“I suppose I’ll give him a ring at some point next week,” I say as I bring my mug to my lips. “Ahh, perfect as always.”

Deborah preens. “The best for you.”

I give her a wink, slightly annoyed at one of my self-imposed rules. Don’t fuck the staff. Often, I consider breaking it for Deborah. She’s so eager to please and that shit makes my dick really fucking hard. However, I know what a storm that would create. No matter how nice the woman looks in a pencil skirt and how the idea of having her on her knees under my desk is quite enticing, it’ll end messily. Deborah is too good at her job to lose her to feelings gone awry. And they absolutely would go to hell because I’m not exactly a relationship kind of guy.

“I have a meeting with Ralph Bison from Bison Group in an hour. Hold my calls. If Perry calls, ask him how much.” We both know Perry only blows up my phone when he needs money for whatever fucking prima donna reason he has next.

I stride over to my office door and set down my deep-brown Venezia leather laptop briefcase so I can enter in my code. Though I trust Deborah with a lot, access to my office when I’m not here is a boundary she’s not allowed to cross.

After opening my door, I pick up my briefcase and hit the lights, illuminating my massive office. It’s not necessary considering the lack of furniture, but I like the negative space. A sleek, five-foot wide black floating desk sits in the middle of the room. It can be converted to a standing desk with a push of a button, which is an absolute must considering how much pacing I tend to do while working. I stride inside, noting an unfamiliar sweet scent lingering in the air, and set my mug and briefcase down on my desk. Like always, I make my way over to one of the two walls of floor-to-ceiling windows so I can look down on the city we own.