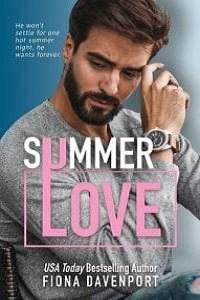 A soft gust of wind ruffled the slightly longer brown hair on the top of my head as I walked up to the front door of my vacation home. The weather here was very different from what Manhattan experienced in July. There was still some humidity, but the ocean brought just enough cool breezes to make the Hamptons a prime summer hot spot—no pun intended.

I knocked on the door, but no one answered. Glancing at my watch, I saw that it was just after five in the evening. The girls had been scheduled to arrive that morning, so I assumed I’d be safe to catch them at home by dropping by later in the day.

Two cars were in the circular drive besides mine, but another knock didn’t bring anyone to the door.

It was my house, but I wasn’t going to just barge in when I’d allowed someone to stay there. Renting out my place wasn’t something I did regularly—or ever, really. When you were worth a few billion dollars, privacy was of the utmost importance, and that meant my homes were sacred.

However, one of my clients, Justice Kendall, had become a good friend over the years. He used my firm whenever he had a legal issue involving corporate, real estate, or intellectual property law. He’d been with me since I started out at a small firm in my twenties, then built my business and reputation until, at thirty-eight, I was the managing partner of my own firm.

Apparently, his house in the Hamptons was under major renovations, but his daughter had recently graduated—high school, I assumed since he’d mentioned her being a teenager—and wanted to celebrate with her friends out here. He’d mentioned it in passing, and since I was stuck in the city for most of the summer dealing with a case that had become a litigation nightmare I couldn’t trust the other partners and associates to handle, I’d offered for them to stay at my summer residence.

I wasn’t sure who was graduating, other than the fact that it was one of his girls. I’d met his children many times over the years, but there were nine of them, so it was hard to keep track.

Nine kids. I’d always wanted a big family, but damn. Either way, it wasn’t worth dwelling over. I’d accepted that I wouldn’t marry and have kids several years ago. Not only because I worked all the time but it had also been a long time since I’d met a woman who’d sparked enough interest to even ask their name, much less ask them on a date.

I returned my attention to the door, wondering how long I’d been waiting as I tried the bell one more time. I’d driven out here to meet with a client about their real estate holdings and figured I would drop by to make sure the kids had everything they needed. Obviously, I didn’t have good timing because the door still went unanswered.

Looking around, I scrubbed my hand over my close-cut, full beard and contemplated my next move. I assumed they would let Justice know if they needed anything, so I decided to do a quick walk of the grounds before heading back to the city.

I was pleased to find that the house was locked up tight but not surprised because Justice would have pounded safety procedures into his kids’ heads. In fact, I wouldn’t have been surprised if he’d hired bodyguards to discreetly watch the house.

After checking the back door, I stood on the large wooden deck that overlooked the rest of the yard and the beach just beyond. Something fluttered in my peripheral vision, and I glanced over to see a piece of paper on one of the patio tables held down by the candle centerpiece. In two strides, I was at the table, and I picked up the paper to read the hastily scrawled writing on it.

In case you get here before we get back, we went to the Majestic for the

Hitchcock marathon. If you don’t feel up to joining us, the code to get in

is four slices of pie and Dad on the rocks. Can’t wait to see you!

P.S. Take whatever room you want. We haven’t picked yet.

The corners of my lips tipped up as I put together the code this girl had left for her sister. It was clever. Pi to the fourth and a number associated with whatever their dad drank—knowing Justice, it was scotch. I didn’t know what they’d picked, but I had a master code in case of a problem. I didn’t foresee needing to use it, though.

I put the note back in its place, briefly wondering why it hadn’t been left at the front door. Perhaps this was the agreed-upon place. I mentally shrugged and moved on, intending to head back around to the front and hop in my car.