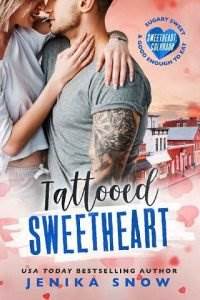 The first time I saw Flora was a couple of months ago. To say my attraction to her was instant was the fucking understatement of the damn century.

She’d been stringing up patio lights outside the coffee shop she’d just purchased in Sweetheart, Colorado. Although it was already winter in Sweetheart, I had respect for her for not caring about the cold and doing her thing.

I asked Ryder, a tattoo artist I hired last year, and a born and bred Sweetheart resident, who she was.

I watched her stand on a small ladder stringing up those lights as Ryder gave me the rundown. He was smart enough not to hound me about why I wanted to know, and easygoing enough he had no problem telling me everything.

Flora Harrison, twenty-four years old. Had lived in this town all her life. One sister, Tatum, and two parents who were as uptight as they came. Flora and her sister had also just leased the building across from the tattoo parlor to open up their own coffee shop, something their parents didn’t care for because it was a risk, and they weren’t all about that.

Small towns gossiped, and Sweetheart was no exception. And over the three years of living here, I experienced that tenfold.

After learning about her, I’d been unable to get her out of my head. I watched her constantly out the front window, and it got to the point where I was thinking about her when I went to bed, and she was the first thing on my mind when I got up.

I scrubbed a hand over my jaw, as today was no different.

Obsession. Infatuation. A sickness for someone or something that consumes you.

Was it kind of stalker-ish on my part that I had no shame when it came to her? I mean, I wouldn’t deny wanting her if asked.

Like right now, I sat behind the front desk of my tattoo shop, my focus out the front window... on her.

I’d seen her arrive at work just an hour before, and although she was now inside, I could see clearly through the large front window at Just One More Cup. It was usually pretty busy, the coffee shop popular in town. And although most got their drinks to go, there were a few—the hungry crowd—that stayed inside at one of the few bistro tables.

“I’m gonna go get a coffee,” I said almost absentmindedly to Ryder, who was busy tattooing a client. The buzzing sound I was so used to surrounded me. Most days, I could filter it out, the sound almost comforting after all these years.

The tingling on the back of my neck told me Ryder was staring at me, and doing it pretty damn hard if I felt it.

I looked over at him and saw he was watching me, his tattoo gun poised above his client’s skin, no longer touching as he eyed me skeptically. One of his dark eyebrows lifted, as if he had something to say but knew better. But the amusement on his lips could not be hidden—that or he didn’t give a fuck enough to try to hide it. It was probably the latter.

I narrowed my eyes at his question, which wasn’t really a question at all. I felt my scowl deepen.

“I’m just feeling like a coffee, okay?” My words were tight, but they had no heat. He knew I watched Flora. It wasn’t like I hid that shit. “Do you want one or not?”

He flashed a grin then shrugged. “I thought you didn’t even like coffee?” he asked as he went back to tattooing the man sitting at his station, a big, burly biker with a long salt-and-pepper-colored beard. The biker had his eyes closed, his expression relaxed, as if he were getting a massage instead of having a needle jabbed into his flesh.

“I like it just fine,” I lied, my words a growl. The truth was I hated coffee. Couldn’t stand the shit. Yet I went over to the coffee shop several times a week, ordered a nasty-ass black coffee—nothing fancy—and sat at one of the tables. All to be close to Flora. All to just look at her.

I’d stay there long enough that the drink would be cold by the time I forced myself to leave. And I was so unashamed by my obvious focus on Flora the entire time I sat there. I didn’t even care if anybody noticed why a big, tattooed guy sat at the corner table for far too long, never touching his drink, always watching her.

I stood and grabbed my jacket; February this high in the mountains is frigid.

“You want something or not?”

“Yeah. Can you grab me an iced chai latte?”

I looked over at Ryder and cocked an eyebrow, even though he wasn’t looking at me and instead focused on creating his artwork.