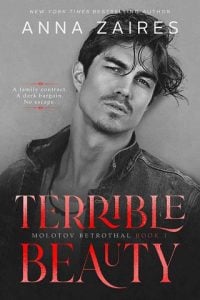 A family contract. A dark bargain. No escape.

Eleven years ago, I met him. A year later, I was betrothed to him. Now he’s come to claim me, slaughtering anyone standing in his way.

My husband-to-be is a monster from a family as ruthless and powerful as mine, a man who deals in violence and destruction... a man terrifyingly like my father. For over a decade, he’s stalked me, shadowing my life.

My name is Alina Molotova, and Alexei Leonov is a fate I can’t escape.

Cool lips brush my throbbing forehead, bringing with them a faint aroma of pine, ocean, and leather. “Shh… It’s okay. You’re okay. I just gave you something to ease your headache and make this easier.”

The male voice is deep and dark, strangely familiar. The words are spoken in Russian. My fuzzy mind struggles to focus. Why Russian? I’m in America, aren’t I? How do I know this voice? This scent?

I try to pry open my heavy lids, but they refuse to budge. Same goes for my hand when I attempt to lift it. Everything feels impossibly heavy, like my very bones are made of metal, my flesh of concrete. My head lolls to one side, my neck muscles unable to support its weight. It’s as if I were a newborn. I try to speak, but an incoherent noise escapes my throat, blending with a distant roar that my ears can now discern.

Maybe I am a newborn. That would explain why I’m so ridiculously helpless and can’t make sense of anything.

“Here, lie down.” Strong hands guide me onto some soft, flat surface. Well, most of me. My head ends up on something elevated and hard, yet comfortable. Not a pillow, too hard for that, but not a stone either. There isn’t much give in the object, but there is some. It’s oddly warm as well.

The object shifts slightly, and from the foggy recesses of my mind, the answer to the mystery emerges. A lap. My head is lying on someone’s lap. A male someone, judging by the steely, thickly muscled thighs underneath my aching skull.

My pulse accelerates. Even with my thoughts sluggish and tangled, I know this isn’t normal for me. I don’t do laps or men. At least I haven’t thus far in all of my twenty-five years.

Twenty-five. I grab on to that sliver of knowledge. I’m twenty-five, not a newborn. Encouraged, I sift through more of the tangled threads, seeking an answer to what’s happening, but it eludes me, the recollections coming slowly, if at all.

Darkness. Fire. A nightmare demon coming to claim me.

Is that a memory or something I saw in a movie?

A needle biting deep into my neck. Unwelcome lassitude spreading through my body.

That last bit feels real. My mind might not be functioning, but my body knows the truth. It senses the threat. My heart rate intensifies as adrenaline saturates my veins. Yes. Yes, that’s it. I can do it. With strength born of growing terror, I force open my leaden eyelids and look up into a pair of eyes darker than the night surrounding us. Eyes set in a cruelly handsome face that haunts my dreams and nightmares.

“Don’t fight it, Alinyonok,” Alexei Leonov murmurs. His dark voice holds both promise and threat as he gently threads his fingers through my hair, massaging away the throbbing tension in my skull. “You’ll only make it harder on yourself.”

The edges of his calluses catch on the tangles in my long hair, and he pulls his fingers out, only to curve his palm around my jaw. He has big hands, dangerous hands. Hands that have killed dozens today alone. The knowledge roils my stomach even as some knot of tension deep inside me unravels. For ten long years, I’ve dreaded this moment, and finally, it’s here.

He’s come for me.

“Don’t cry,” my husband-to-be says softly, brushing away the wetness on my face with the rough edge of his thumb. “It won’t help. You know that.”

Yes, I do. Nothing and no one can help me now. I recognize that distant roar. It’s the sound of a plane engine. We’re in the air.

I close my eyes and let the hazy darkness take me.

A tentative knock falls on my bedroom door. “Alina, are you in there? Come on, it’s time for our lesson.”

Yeah, fuck that. I pause the game I’m playing on the Wii and thumb up the volume on my iPod until “Get Low” by Lil’ Jon & The East Side Boyz is blasting in my ears, drowning out the annoying voice of my tutor.

Muting the sound on the TV, I resume the game and guide Mario down the road, ignoring the continuous knocking. I don’t know why I have to take English lessons all summer long when I’ve been studying at a boarding school in New Hampshire for the past three years. By now, my English is as good as any of my American classmates’, my Russian accent nonexistent. Sure, my spelling and grammar could be better, but I’m just heading into ninth grade. I’ll learn all the stupid rules eventually.