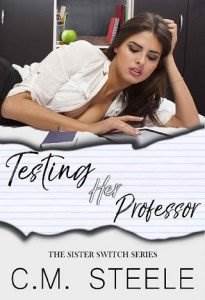 “You have to do this for me,” Alexa says, standing in front of me with her hands on my shoulders. Her long black hair looks raggedy as she stares at me with a look of desperation and intent. I push her hands off me gently, pick up my cup of coffee, and walk from the kitchen to my bedroom. Of course, she stalks right behind me.

My sister and I are exact opposites when it comes to school and our clothes. I dress like a professional that I am and always have. My sister prefers tanks and tees with leggings and a pair of sneakers.

“You know that’s cheating, right? Like you could be kicked out of school and get no damn degree,” I remind her. She’s been asking me for two years to do this.

“You don’t understand, I’m not taking another semester of this shit. It’s been two years of this class, and I should have had a job like you already. Hell, I’m going for a teaching degree in History? We’re twins for fuck’s sake.” She tosses herself on my bed, getting more and more annoyed by the minute. At twenty-two, she should have graduated, but she’s awful at math, which is the only class she has to take.

“Then, you should know that cheating is unacceptable.” She’s already proving to be a terrible role model for students, but I can’t say I really blame her.

“Ugh, so is a teacher who took six years to get her bachelors because she’s a loser.”

“You’re not a loser, and it hasn’t been six years yet,” I remind her as I take a sip of coffee. It’s Sunday. I’m not in the mood for anything except curling up in my little nook with my latest paperback. I have a strange addiction to crime novels lately, breezing through them faster than I can purchase them.

“Easy for you to say. You have a job.” She has me there. I make enough to pay all the bills in the apartment we share while she works to pay for her car to get to and from school.

“Please, it’s only one day. You can go in and quietly take the final and leave. He’ll think you’re me, and no one will be any the wiser.”

“Like you said, I have a job, and I can’t take off because my boss is getting ready to go on a business trip.”

“I bet you already did most of the stuff for his entitled ass. God, how can you work for that guy? He bosses you around like crazy.” She’s never met my boss, but she has seen his emails—a prickly one that grated her nerves.

“Um, because he’s my boss, and my only job is to assist him. Yes, he’s a prick, and everyone thinks so, but he’s not really mean to me. He’s just demanding and gruff.”

“I think he’s a prick, but I’d be all sugar and sunshine for him if we switched spots. It’s only one day. I promise I can handle being sweet. Hell, you can come back to the office and switch clothes and go back to work for Captain Asshole.”

“No. I meant the switching out during the day.”

“So, you’re considering it.” I’m already regretting it, knowing damn well that it’s dangerous and stupid, but I feel for her. I hated gym in school, and it’s the only class that I ever received a ‘C’ in.

“Fine. Give me your textbook and exam study guide. I’ll need to study all day, so you owe me big time.”

“What do I need to know about Mr. Bossy Pants.”

“One, he doesn’t like to be called anything other than Mr. King.”

“Sorry. I promise to be good.” I take her study guide and smile. This is easy for me. “Hey, nerd alert, please don’t get a perfect score.”

“Duh, because I wouldn’t get a perfect score, and Mr. Stuffed Shirt would know something’s up and that maybe I found a way to cheat.”

“How bad is your grade?”

“I need a ninety on the final to pass the class.”

“Shit. What have you been doing?”

“I don’t see what the hell letters have to do with math. It’s total horseshit.”

“Okay. Another thing, please control your temper. No one talks to Mr. King disrespectfully and keeps their job.”

“Understood. I wouldn’t do that to you. Besides, I’m going to spend the day trying to keep everything together.”

“Everything should be good. Mr. King takes his coffee with two creams and two sugars.”

“Wow, you went to school to be a barista.”

“Quit it. My job is more than that, but the man is busy, and it makes it easier. Your new laptop was courtesy of the bonus I received after working late for a week straight.”

“Sweet. Okay. I suppose I can be nice. So two and two for the coffee. Does Captain Asshole get it when he first comes in or only when he asks?”