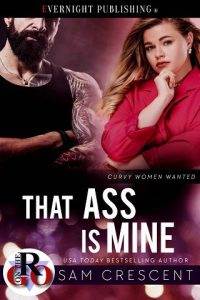 Shaking his head, he moved toward the bar.

There was only one woman he was interested in, and that was Talia. He didn’t like the way most men watched her.

She wasn’t a stripper. She’d come to him when she’d turned eighteen, begging for a job. To him, she’d been nothing but jailbait. Long, silky blonde tresses, kind blue eyes, not to mention her curves. He’d always been a sucker for a woman with some meat on her, and Talia made him want to do dirty things to her.

Four years of craving her.

She dropped the towel she’d been using, and this time, he really did need to control himself. That ass.

He had so many fucking fantasies of her curvy ass. Seeing as she worked in his strip club, simply called Sarge’s Tits—yeah, blunt and to the point, but it didn’t detract any clientele—she often wore tight jeans and shirts that seemed to enhance the largeness of her tits. The men often drooled for her, but not once had she gone on stage. She never wore heels either.

Sarge had demanded she remove the heels. She’d nearly killed herself trying to walk in them. So sneakers it was, and he didn’t have a problem with that.

Watching her now, he wanted to remove all the assholes who stared at her. Scrub their eyes out with bleach. Instead, he stepped behind the bar and glared at all the men, daring them to say something to him as he moved into their territory.

“What do you want?” he asked, glaring at the man in front of him.

“Er, I’m waiting for Talia to serve me.”

“You’ve got me. What do you want?” He leaned on the counter so the man got a clear shot of his muscles and ink.

Some men were easy to intimidate. If they wanted to push him, then he could certainly take them all on. He was no stranger to fighting. He’d once been part of an MC, and it was only when he didn’t like the direction the club was taking that he pulled away and made a life for himself.

To be removed from the club, most men would have died. Not him. He’d taken the beating, and the ink he’d once displayed with pride had been decorated over. No one would have ever guessed who he once was.

The only thing he’d kept was his name.

He had no other form of identity. This was who he was.

The rest of the night went by without any event. He kicked everyone out at two in the morning, taking the keys from men who thought they could still drive. Save him assholes. After bolting the main door, he turned back to the room, and again, Talia was bent over a table.

He had to keep reminding himself she wasn’t an eighteen-year-old any more, but a sexy-as-fuck twenty-two-year-old. Not that it made it any easier for him. He was forty-five years old. He shouldn’t even be looking at women like Talia, but yet, here he was, watching her.

“Thank you for helping me out at the bar. You know I’ve got it handled though, right?”

“I’ve told you a thousand times, Talia, I’m not going to fire you.”

She chuckled. “Thank you.”

“You’ve come a long way from the girl who smashed every single glass she touched.”

Talia snorted. “I wasn’t that bad.”

She giggled, walking past him. Even after working in the bar for nearly eight hours, she smelled like vanilla. So fucking sweet. He needed to get a grip on himself. He wasn’t some teenage boy waiting to get his cock sucked. All he had to do was snap his fingers and he could have women lining up at his door, waiting to service his dick. This woman shouldn’t bother him, and yet, here he was.

He hadn’t had a woman in months.

The only person to make him feel this way was Talia.

Sarge watched her as she walked around the bar, humming to herself. Even at two o’clock in the morning, she seemed happy. She had so much energy.

“Talia, are you seeing anyone?” he asked.

The moment he did, he hated himself for it.

She turned toward him with a smile. “No.”

Her cheeks went a beautiful shade of red.

“Anyone waiting for you?” he asked.

“Sarge, I have no one, okay? My parents died in a car crash when I was eighteen. I was desperate for a job. I had nowhere to go. Believe me, I’ve never had anyone want me. No love interest of any kind, ever.”