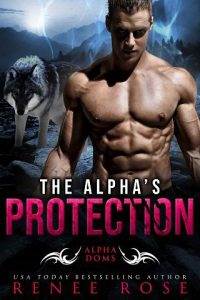 I strip off my clothes and dive into the moonlit swimming pool in the foothills of Denver.

My children and I were dropped here at the home of a total stranger—a wolf in the Denver pack—who pledged his protection of us the moment he met us. The reason he pledged it is no mystery.

I caught his scent, and my body came alive. I have to guess he experienced the same thing.

But we hardly spoke because he was involved in some kind of drug sting, and we were spirited away to the safety of his home until he returned.

The kidney-shaped pool is beautiful, with a natural oasis look and a waterfall into the hot tub at one end. There’s a fall chill to the air, making steam rise from the warm water. The moon hangs low in a starry sky.

I swim the length of it underwater, emerging to fill my lungs. I haven’t swum in years, but being in the water soothes away some of my frayed nerves.

I took my pups and ran away from my abusive mate in Kentucky just over a month ago, and every day, I regain a little more of myself. We’re probably safe here, at least for the moment.

Even so, I’m swimming to burn off my anxiety. If Dirk—the asshole father of my pups—somehow finds us, there will be hell to pay. But I’m not going to let him drag us back, whatever he may threaten this time.

I can’t go there. I have to believe he won’t find us here—at least not tonight.

I dive back under the water and swim the full length of the pool again before emerging for air. When I do, I gasp.

The shifter’s scent reaches me first—leather and coffee and delicious male. He’s home.

DEA Agent Mark Ruhl stands at the edge of the pool staring down at me with a predatory gleam in his eyes. He’s older than I am by at least ten years, maybe more, and he looks incredible in his uniform with broad shoulders and thick corded muscles running down his arms.

I bend my knees to hide my bare breasts under the water line, and our gazes lock.

“You don’t have to be scared of me, little wolf.” His voice is a rich baritone that sends tingles across my shoulders and the back of my neck. It rumbles deep with authority but not the kind I’ve learned to beware. The kind that inspires warmth and safety. Like the authority I thought my father wielded, before he arranged my mating to Dirk.

Mark crouches down, his eyes gleaming in the moonlight. He says nothing, just holds my gaze in a way that makes my heart pound. “Are you afraid?”

My body comes alive for the first time in years. My nipples pucker in the warm water, and frissons of heat warm my core. I swallow. “N-not of you,” I admit.

His lips quirk a little at the corners. “Good. I’m sorry you were left here alone.” The corners of his eyes crinkle. “I’m glad you’re swimming. It looks like you felt safe.”

I nod. “Did everything go all right with the drug bust?”

“Yes. Everything worked out.”

I swirl my hands over the surface of the water, and my breasts cool as they come out. I immediately drop back down.

Mark’s eyes take on a silver glow, and his nostrils flare. “Were you out here to tempt me, little she-wolf?”

I shake my head although now that he says it, I wonder if my she-wolf didn’t orchestrate it.

“I think we both know that this attraction between us—” He stops speaking when I continue to shake my head, backing up.

“Okay. You’re not ready to hear that. Of course you’re not. Come back.” He beckons to me, but I don’t move. He shows no sign of irritation. Instead, he seems to soften. “You’ve been through a lot, Colleen—too much. I know you’re still scared. I just want you to feel safe right now. To know that I’m going to take care of you and those pups. I won’t let anyone touch you, I promise.”

I believe him. I mean, I believe his intentions. But he doesn’t know how powerful Dirk is—an alpha with a pack of at least 150 wolves. Nor how cruel.

And yes, I know Mark Ruhl is my true fated mate. I knew it the moment I caught his scent. Even now, my spirits lift being near him like the sun coming out after the storm from hell.

But I can’t let him mark me and claim me as his own because doing so will sign the death warrant on both of us. Possibly my children, too. Dirk is that psychopathic and that powerful.

“Come here,” he beckons again, and this time my body obeys of its own accord, creating miniature currents as I step forward to the edge of the pool.

He reaches for me, and I don’t move out of his grasp, even though he’s a near stranger and all I’ve known for the past ten years has been torment at the hands of a male. My body knows its master. My she-wolf wants to be claimed.