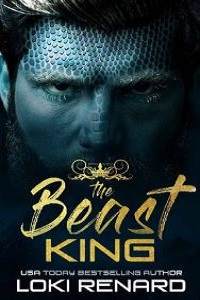 “You are nothing but property, human. You are mine to take, mine to use, mine to punish, mine to own. Mine, in every way.”

The king loomed over her, eyes dark, skin scaled, a personality with the force of a natural disaster just barely contained in the form of a single male. There was torment in his eyes, the promise of charismatic pain inflicted at his will and for his amusement until she submitted — and long after besides.

Elizabeth had long given up the idea that there was any way to appease this kind of regal creature. If you obeyed, you might earn something like favor — but it was not guaranteed. And she had not done anything to earn this royal beast’s favor. She had defied him. She had defied him so completely that even she did not know what awaited her in terms of punishment.

Konan was the kind of king humans had trouble understanding. The only easy allegory she had was that his nature was something like Genghis Khan, but more bad tempered, and with fewer horses. His fingers wrapped around her throat, holding her still so she could not avoid his gaze. When he spoke, his voice was elegantly brutal, like silk with a club beneath it.

“You tried to take something from me that was never yours to take. You have meddled. You have stolen. You have disobeyed. You have committed every crime in our books of law.”

She emitted a squeak which did nothing to satisfy the king’s anger. Attraction and loathing swirled inside her. She’d waited her entire life to feel even a fraction of these feelings for a man. But this was not a man. This was a monster, and what she found herself wanting was not something any sane woman should ever want.

He was regal beyond compare, gripped with an obsession for power and domination which would leave her in tatters. Nobody and nothing survived the beast king when he decided on his path. He was like an animal, tearing through all who opposed him, defying the very laws of nature to obtain what he wanted.

She quivered and squirmed, his large hands cupping the rounds of her rear, using her ass like a handle as he drew her inexorably down toward the largest, thickest male appendage she had ever borne witness to. She screamed out as he began to penetrate her with his masculine rod of mating discipline.

“KONAN!” She screamed his name as those massive blue hands pulled her toward his shaft, her dripping juices slicking the way for her lower lips, sliding over the alien ridges of his cock.

“You are a very, very bad girl,” he snarled, his teeth snapping at her neck, threatening to draw blood. “You are the kind of female who must be forced into submission constantly. The second you stop contorting in breathless orgasm is the second you start plotting all over again.”

He had it wrong. She was innocent. Or, as innocent as she could be while caught up in situations so far beyond her control that every act she undertook made the situation worse. There were no right answers. There were no good choices. There was only this barbaric king and his will.

She clung to him, her fingers gripping the muscular ridges of his shoulders, feeling the flush of scales which rose when he was aroused. Her life depended on his desire for her. He was dangerous beyond compare, but when he looked at her, the darkness softened for a moment and where death should have followed, lust took its place.

She should have hated him. She had every reason to. She should have been the traitor, the liar, the spy he accused her of being. But there was something inside her, some answering darkness, some strength which matched and perhaps even exceeded his which made her equal to the rough, punishing thrusts which claimed her tender sex, pink lips spread wide around thrusting blue flesh…