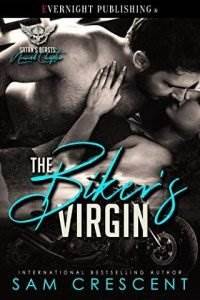 Tipping his beer back, Ape averted his gaze, not interested in having to deal with any of his club brothers right now. They’d been traveling for four days straight and this was their first real break. Hanging out around a beat-up motel that had seen way better days, with free pussy and lots of drink, he wasn’t feeling it. Sure, his dick ached to be inside a woman, but he couldn’t do it.

His prez, Colonel, had carried his old lady into one of the rooms where they would no doubt stay for a couple of days. Whenever there was a long time spent between rests, Colonel and his woman always needed a few days catching up and fucking each other. Running a hand down his face, he slammed his fist against Skull’s arm. “Fuck off. I don’t want the company.”

Ape stood and walked away, Skull laughing as he went. It wasn’t like they weren’t used to having a woman on the road with them. He was. After throwing his bottle into the trash, he headed away from the motel. There was no way he was going to enjoy a night’s sleep. The place looked like it had roaches.

As he walked down the street, the quiet of the night washed over him. The town itself looked all right. He’d clocked the big houses on arriving and there was also a small town center.

He loved small towns. People were constantly entertaining, especially some of the “posh” people. They often behaved like they wanted to be rid of them as if they carried some disease. Then there were always a few of the groupies who believed riding with the club was the key to a good life. Most of the time, the women got bored of being on the back of a bike. Sure, they liked having the men’s undivided attention at night, but it was getting to that point when the pull of the road and freedom of riding won against pussy. For him, his bike would always win against a woman.

Women were good for sucking and fucking, but nothing permanent. He wasn’t jealous of Colonel and Piper, more curious.

They’d been together for a couple of years, married, and they were still going strong. When Piper first came with them, he thought she’d last a couple of weeks tops. Instead, she took the road and the nomadic way of life easier than he expected. She didn’t seem to mind if she didn’t have a bathroom for a couple of days. Whenever they stopped, she always took time to refresh in a bathroom.

He shook his head. The road wasn’t a place for a woman.

Ever since Piper had entered the scene, Colonel hadn’t strayed. What was it about the one woman? He didn’t get it.

Sure, Colonel had been instantly attracted to her, but that shit would fade.

He kicked a stone as he passed a large school that looked more like a prison. Ape had dropped out of school many years ago, never finished. Never needed it in his line of work.

Coming to a stop at the edge of the long strip of town, he shook his head again. In all of his years of traveling, he’d come to the conclusions that many places were alike in so many ways. Always the divide between rich and poor. Long town streets. People’s views of them.

The only differences were usually the wealth that held them.

It wasn’t too late, and he saw a diner open and a couple of other nearby restaurants still aglow. Walking down the main street, he came to a stop as a woman and man exited a building.

“You’ve got no cause to shut this place down, so don’t even think about it, Calum.”

“Your place is an eyesore. People don’t like what you do, Charlotte.”

“What I do? I’m not a damn brothel. I bet if I was, there would be a hell of a lot more of a battle to keep me open. People can’t stand to have art on their flesh but swinging tits would win out.”

“Don’t even try me. You think I don’t know what you get up to in your free time? Spare me the condescending bullshit where you pretend to be on some kind of pedestal that you don’t deserve. That ship sailed a long time ago.” Charlotte stepped up into Calum’s face.

Ape, with her back to him, was turned on by her stiff spine, curvy ass, and that mouth on her.

“Let’s face it, you’d be happy to fight for my place if I’m willing to give a little back. Isn’t that right?” She ran her hand down Calum’s body.