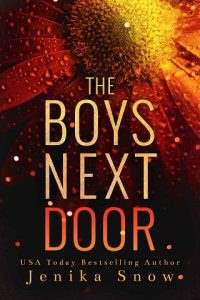 Losing her virginity against the side of a house during a party wasn't what Sasha Marsh had envisioned for herself.

But then things took a kinky twist when she found herself in bed with both Ashbury twins.

Now, six years later, that night seemed like a distant dream or maybe a hardcore fantasy.

Being back home after so long made Sasha realize she wasn’t prepared for the intense emotions that bombarded her when she sees the brothers again.

But it seemed like fate wanted a repeat performance because she found herself in another torrid encounter with Tanner and Jonas.

But can a relationship with the twins really work, or do they only want Sasha for one thing?

Reader Note: This was previously published under the title: Being with the Brothers Next Door. It’s since been recovered and reedited. The story itself is the same. It contains MFM and DP scenes.

“You know,” he came closer, “since Jonas and I came back for the summer, you’ve been acting strange.” He took another step forward, and another, until he was toe-to-toe with her.

She had moved over to the side of the house, partially away from everyone else. Right now, she regretted that, especially with the arousal that coursed through her like a freight train.

“You know what I think?” He leaned in so close that only an inch separated their mouths. The side of the house was hard and cold behind her, and Sasha placed her hands flat on the siding, needing to feel something stable.

“I think you like hiding behind a façade, but guess what?” She forced her eyes open when tendrils of her hair tickled the side of her face from his breath.

She licked her lips and breathed out, “What?”

He looked down at her lips then back at her eyes.

“I know that you want me as much as I want you.” And just like that, the world fell away until the only thing she was aware of was Tanner’s body pressed against hers.

He slipped his hand behind the heavy fall of her hair and gripped her neck. His thumb brushed along the side of her jaw, and then he tilted her head back and slanted his mouth on hers. The taste that was all Tanner bathed her tongue in a spicy, intoxicating flavor. A moan surrounded her, but she couldn’t tell if it came from him or her.

He pulled away just enough that his lips barely touched hers, and said, “You have no idea how long I’ve wanted to kiss you.”

She had to be dreaming because things like this just didn’t happen to her. She wanted to ask him what he meant, and why he never said anything, but Sasha couldn’t form a coherent word. He took hold of her hand and placed it right over his chest.

The steady thump-thump of his heart was strong and steady. He moved their conjoined hands over his hard, rippled abdomen and right over the very prominent and hard erection that pressed against his jeans.

Her eyes widened, and her heart stalled.

“Do you feel that, Sasha? You make me so fucking hard.” His lips were still barely touching hers as he spoke, but it was the way he said those words and pressed his hips into her palm that had her feeling like Alice falling down the rabbit hole.

He moved his lips along her cheek, over her jawline, and down to the pulse that beat erratically below her ear.

“Just thinking about you makes my cock harder than any other time before. All I’ve thought about for years, Sasha, is being buried inside of you.”

She let her head fall back against the house and closed her eyes as he ran his tongue and teeth along the side of her throat.

“You’re drunk and don’t know what you’re saying, Tanner.” She meant to sound more sure, more determined to stop this, but her words were all breathy, and the complete opposite of what she had been going for.

He ignored her statement and continued to lick and nip at her skin until Sasha couldn’t think clearly. This needed to stop because, if she let it go any further, she would give herself to him pressed against the side of his house.

Finally, he responded to her. “Yeah, I am pretty drunk.”

Her heart plummeted at his words.

“But I’m not that drunk that I don’t know I have my best friend’s little sister against my house with her hand on my cock.”

“If you don’t quit hanging around with us, you’re going to get hurt.”

Sasha had to run in order to keep up with her brother Rian, and his best friends, Jonas and Tanner Ashbury. She might only be twelve, but hanging out with Rian and his two best friends was a lot more fun than playing with dolls at Seana’s house.

Sasha pumped her legs faster trying to keep up with their long strides. It was Saturday, and they were all going to the lake to watch the girls in bikinis. Well, the boys were. Sasha just tagged along. The guys were rounding the bend that would take them right to the lake when her foot caught a rock, and she fell forward.