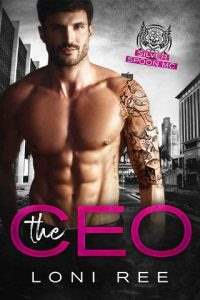 Looks. I’ve got in spades.
Money. I’ve got it coming out of my ears.
Power. I’m CEO of a large investment bank in Texas. Do I need to say more?

Too bad there’s something missing.
My MC brothers keep me grounded, but I’m swimming in a sea of loneliness. One cold, rainy night, I pull over to help a stranded motorist and get the shock of my life. My soulmate has been living right under my nose for months, yet we’ve never crossed paths.
Unfortunately, meeting her sends my mind reeling and my charming personality is nowhere to be found. When I end up insulting my gorgeous, curvy girl, she puts me in my place and walks away.
She might be determined to write me off as another conceited jerk, but I’ll do whatever it takes to make her mine. Even if I have to fight a little dirty.

These wealthy Texans have it all—Money, looks, power, their MC and brothers. The only thing missing is someone to share it all with. There’s a shortage of eligible ladies in town but these determined men won’t let that slow them down. These MC brothers are going to turn the town of Silver Spoon Falls, Texas, on its ear looking for their curvy, soulmates.

“Son-of-a-bitch.” I rub the back of my neck while Dr. Tate “Hands” Grimes, my Vice President, explains the shit show going down at the Silver Spoon MC compound. We’ve been dealing with a moron Prospect who doesn’t seem able to find his own ass with both hands. Every time my phone rings, I expect another “Brady” fuck-up. Today’s problem is going to push me over the edge. Evidently, the little shit neglected to tell us about his outstanding arrest warrant, and our standard investigation didn’t pick it up since the small-town judge only listed it locally. Brady got into a bar fight two years ago and was sentenced to a few days in jail and restitution. When the dumbass moved away still owing the bar owner twenty thousand dollars, the judge issued a warrant for his arrest. The county recently updated its computer system, reissuing all outstanding warrants nationally. Today, Sheriff Armstrong showed up at the compound looking for the Prospect. Bringing the law to our front door is fucking stupid. We aren’t an outlaw MC, and we keep our noses clean.

We chose Brady as a favor to his brother, the mayor of Silver Spoon Falls. Trying to keep our friendship with Chris Branson is going to cost me my sanity. When the Brighton family got tired of dealing with the black sheep’s fuck-ups, they decided to share their pain with us.

“When you find the little shit, let him know this was the last straw,” I roar. I’ve hit my limit with the dumbass.

“When did I become your flunky?” Hands wants to know.

“I’m fucking up to my eyeballs in alligators.” I sigh.

Hands takes a deep breath and releases it slowly. “I know, man. But I have the surgery schedule from hell right now.”

“Is Cowboy around?” Landon Cowboy Rickman is the club Enforcer. He’s also the owner of the Silver Spoon Ranch, which has been in his family for several generations. When we started the club, all the brothers chipped in and bought the land next to the ranch for our compound.

“He left for Houston earlier this morning,” Hands informs me. “I’ll ask him to keep a look-out for dipshit when he gets back.”

“Thanks. I’ll head out to the compound when I can break away.”

“I’ll meet you there,” Tate agrees and hangs up.

Fuck me. One more issue added to my long list of shit. I grab the silver motorcycle paperweight sitting on the edge of my desk and fling it across the room before I’m able to control the anger coursing through my blood.

Rulie, my PA, sticks his head in the door and grumbles, “What crawled up your ass?”

The middle-aged, tattooed biker steps into my office and walks over to pick up the dented paperweight. “This thing gets more miles than your real bike.” He smirks and shakes his head. “What did dumbass do this time?”

“He went above and beyond this time.” I take a deep breath and explain the situation to my friend. “I feel a fucking aneurysm coming on,” I growl.

He calmly shrugs. “Can I have your ride and man cave when you croak?” He drops into the chair in front of my desk and stares at me. Not many CEOs are burly bikers, but I’ve always been a little different. My celebrity parents raised me and my two siblings to choose our own paths in the world. When my grandfather founded Montoya Investments fifty years ago, he thought his son would take over the business when he retired. Too bad, my dad had other plans. He bucked convention and his own father’s expectations and followed my mom to Hollywood.

After my mom’s career took off, Granddad lost all hope of them returning to Silver Spoon Falls. A string of nannies raised us while my parents basked in the spotlight. Growing up with famous parents taught me to long for peace and quiet. I attended a small, private college near my grandfather, then moved to Silver Spoon Falls after graduation to work at Montoya Investments. When my granddad retired three years ago, I was a shoo-in for the CEO position. He died two years later, happy with my plans for the company he’d spent his life building.

My two younger siblings took their own paths. Zane went to law school in New York and works for a fancy Manhattan law firm, while my little sister, London, is a fashion editor at Curvy Cuties Magazine. Reaching into my desk drawer, I pull out the roll of antacids and pop two in my mouth. “Thanks for your concern,” I grouse after chewing. “At least I know where I stand with you.”

“No problem.” He shrugs and I glare at him. “Seriously, you let this shit work you up too much. You’re the prime age for a heart attack to sneak up on you.”