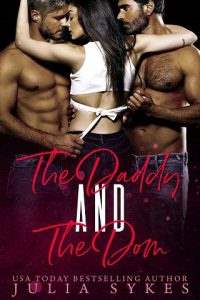 My frozen skin was icier than the cold tiles at my back, a searing contrast to the heated blood that pounded a head-splitting drumbeat in my ears. My racing heart slammed against my ribcage, inflicting a bruising ache deep in my chest.

The wicked scar carved into my attacker’s face twisted on a leer, and his hot breath burned my frozen cheeks. His wiry body pressed into mine, the sharp edges of his joints pinning me in place. Something hard jammed into my side: the gun he’d used to threaten me and compel my silence.

All my muscles locked up with the sudden, primal knowledge of mortal danger. One wrong move, and a bullet would tear through my stomach.

He leaned in close, his rough stubble scraping my cheek.

“You’re very pretty.” His oily words oozed over my neck, leaving a toxic trail. “I can see why Joseph likes you. I’m sure he’d be heartbroken if anything happened to you.”

Sticky warmth painted my skin, and when he pulled away, his face was a gory mess. Blood spilled over his thin lips, cut raw by his broken, jagged teeth.

Joseph had done that. He’d smashed the man’s jaw when he’d come to my defense.

Horror was a lead weight in my stomach, and I managed to tear my eyes from the nauseating sight of his ruined face. Frantically, I searched the cramped bathroom for my savior, the man I loved.

But Joseph wasn’t there. I was alone with this monstrous man, completely powerless to escape him.

“You’re very pretty,” he said again, his tone roughed with sick hunger. “Maybe I’ll pass you around to my friends until they get bored, and then I’ll kill you.”

Shadows thickened in the corners of the small space, growing into dark, indistinct silhouettes of towering men.

A second hard length pressed into my hip, larger than the gun shoved into my side.

I thrashed like a trapped animal, and my shriek echoed through the bathroom, rebounding against the tiles to pierce my eardrums. The shadows closed in on me, trailing frozen fingers over my flesh.

My wordless scream coalesced into Joseph’s name, begging for him to save me…

“Ashlyn! Wake up, angel.” The strong fingers that closed around my shoulders were warm and calloused; nothing like the icy, grasping claws of my shadowy attackers.

My eyes snapped open, and I finally found the intense, flame-blue stare of my savior.

“Joseph!” I half-sobbed his name and buried my face against his chest, breathing in his comforting, masculine scent.

His steady heat sank into my frigid flesh, but the shadows still clung to my mind with icy, dark tendrils. I pressed closer to him, struggling to fully surface from the nightmare and ground myself in the safety of his strong arms.

I barely had time to register two of Joseph’s thundering heartbeats beneath my ear before a deafening bang tore through the room. The feel of my attacker’s gun was a phantom pain rammed into my side. The terror that’d barely begun to ebb away surged again, and I cried out as my nightmare eclipsed reality.

“Jesus, Marco!” Joseph snapped. He pulled me tighter to his chest, and the pressure of his muscular arms around my shaking body reassured me of his protective presence. “It’s okay, angel,” he murmured, pressing a tender kiss to my forehead. “You’re safe.”

“I heard screaming.” The rough growl should’ve made my insides quake, but I recognized Marco’s rumbling voice.

My face lifted from Joseph’s chest, my eyes searching for my other fierce savior. I hadn’t longed for Marco in my dream, but now that his powerful aura pulsed into the room, I was desperate to catch sight of him. I wanted to reassure myself that he was real, too. That both of these immensely strong men were here to shelter me, like they’d promised.

My eyes found Marco, and my breath caught in my throat. His ripped, muscular body was impossibly broader and more intimidating than I’d ever realized. His sculpted chest was bare, and his defined abs bunched tight with coiled aggression. He wore nothing but a pair of black sweatpants slung low on his hips. His massive physique was on full, hulking display.

The sight of his towering frame swelling to fill the doorway should’ve been scary as hell, but I released a shuddering sigh as relief rolled through me.

“It was just a nightmare.” Joseph addressed Marco in clipped tones, and he pulled me closer to his hard body.

The cold light that glittered over Marco’s obsidian eyes melted, and the ferocious snarl eased from his rough-hewn features. “You had a nightmare, princess?”

He took a step toward me, and my surroundings finally solidified. I was in Marco’s bedroom, where I’d been sleeping with Joseph.

At some point after he’d whisked me away from the dangerous encounter at the restaurant, Marco had carried me up here and tucked me beneath the plush duvet, ensuring I was warm after my bone-chilling confrontation with their enemy. I barely remembered falling asleep in Joseph’s arms, exhausted and shaky from the frightening experience. The trauma of being cornered and threatened by a mobster must’ve followed me down into sleep, triggering my night terror.