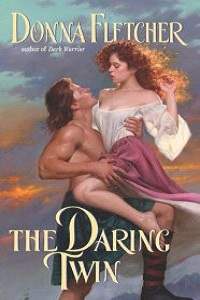 “I would rather rot in hell than wed him,” Fiona said, her tone as sharp as her brilliant green eyes. “I have a right to wed whomever I wish or to wed not at all, if I so choose. Leith may be chieftain of the MacElder clan . . .”

She lapsed into silence knowing full well her protests would serve little purpose.

“Our cousin Leith will have his way.” Her twin sister Aliss acknowledged what Fiona had already realized.

Fiona drew up her legs to her chest and wrapped her arms around them, stared at the stream a few inches from her booted feet. She had not expected this turn of events. There had been talk that a powerful chieftain searched for a wife, but it meant nothing to her. She had all intention of finding her own husband, but that had changed fast enough.

“Leith believes this union will prove beneficial to our clan and many agree,” Fiona said. “There is talk that Tarr of Hellewyk will stop at nothing to gain more land and power. With his father’s recent passing he is now, at twenty and nine years, chieftain, and with his land bordering MacElder land—” Fiona shrugged.

“Our clan fears he will attack us so it is better to keep him friend rather than foe,” Aliss finished.

The twins sat in silent companionship on the edge of the bank. Autumn had barely arrived and summer’s warmth continued, allowing the flowers’ last blooms.

Fiona could not make sense of the last few months. Word that Tarr of Hellewyk searched for a wife spread throughout the clans, and many women were interested in the mighty warrior. So why did he choose one who has no interest in him?

Leith had informed her little more than a week ago that he, as chieftain of the MacElders, had entered into an agreement for her to wed Tarr of Hellewyk. She had laughed at him. His face reddened and he yelled that she would do her duty to her clan.

She had named several women in the clan who would gladly agree to the arrangement. But Leith was adamant; she was the chosen one. And now she would wed a stranger. The idea of never achieving her dream of finding love rankled her and had kicked her stubborn nature into action. She had made it known that she would not wed Tarr of Hellewyk under any circumstance. The clan had claimed her selfish, many refusing to speak with her while others outrightly belittled her.

Aliss interrupted her musings. “I never gave thought to us separating.”

Fiona fisted her hands at her knees. “We will not be separated.”

“Tarr of Hellewyk wants no burden of a sister-in-law.”

“He will get no wife in me and therefore no sister-in-law, and it is a selfish one he is to think to separate twins.” She would fight the devil himself to keep Aliss and her together.

“They plan your wedding at this moment and what follows,” Aliss reminded.

“They think we have no say in the matter.” Fiona picked up a twig off the ground and with two fingers snapped it in two. The thought that the skinny twig could be Tarr’s neck relieved some of her tension.

Aliss drew closer to her sister’s side. “You have an idea?”

Fiona tossed the piece of twig aside, her round face brimming over in a smile. “A plan of sorts that just might work. It will not be easy, but it will certainly delay the wedding and may ultimately prevent the union from ever taking place.”

“Leith made it clear that Tarr looked for a strong woman to give him sturdy sons to carry on his clan’s name. Even when I insisted that Tarr had his pick of solid women who fit his requirements, Leith had countered that none matched my courage. And none irritated him as much as I do, though he dared not admit it. My wedding Tarr would serve two purposes. Leith would be rid of me and gain a strong ally.”

“He had intended this all along,” Aliss said with surprise.

“And kept it from me until he felt there was nothing I could do but surrender to his decree.”

“Us,” Fiona corrected. “For my plan involves the two of us.”

“What if one twin could not be distinguished from the other? After all, we share identical features, bright red hair, green eyes and good birthing hips. Those in the clan even have trouble telling us apart. It is our opposite natures that make us distinct.”

“I am strong-willed and outspoken and I like riding, hunting and weaponry, whereas—”

“I am soft-spoken and softhearted, my interests that of herbs and healing,” Aliss finished.

“We are both independent,” Fiona said, “though many believe you dependent on me and that is only because of your gentleness. They do not know of your courageous nature and it is that strength you must rely on if we are to carry out this charade. We will need to combine our opposite natures so that there will be no distinguishing one from the other. You will need to speak up more, be a bit more bold—”