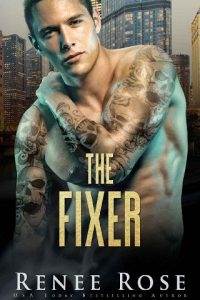 My father’s men say he only has days to live. Maybe only hours. We’re at his home in Moscow—a residence I’ve never been permitted to enter before.

A place I hated from the time I was a little girl.

It means little to me now. Ditto on his approaching death.

I can’t say I love the man. He was a terrible father and a worse partner to my mother. Partner, not husband—no, he couldn’t marry her.

It’s against the bratva code.

She was his kept mistress for thirty years until last week when he informed her she was now the mistress of Vladimir, his right-hand man. That’s right—he literally bestowed his mistress on another man. Like she was some whore he owned. No, worse than a whore—like she was his slave.

She had no choice in the matter.

“Come, Sasha, your father wants to see you,” my mother says in a hushed tone. My once beautiful mother suddenly appears old. She’s pale, her face drawn up and pinched in grief.

Despite it all, she still loves my father deeply.

I follow her into his room. He didn’t want to die in a hospital, so his large bedroom has been converted to one. Medical machines surround him; there are nurses on duty twenty-four/seven. The curtains are open, letting the summer sun in through the large windows.

I flinch. He’s still as formidable as ever, even thin and frail in his crimson striped robe. His face is a deathly grey pallor.

“Come.” He summons me to his side. I walk over reluctantly. I may be twenty-three, but something about the man makes me still feel like an errant child. He takes my hand, and I have to work not to shudder at the feel of his dry, bony fingers holding mine.

“Sasha, I will provide for you,” he says. Coughs.

Providing for us was the only good thing he did for me and my mother. I should be grateful. We’ve lived in luxury for our whole lives. I even got to attend the college of my choice in the United States—University of Southern California, where I studied acting. But of course, he summoned me back the moment I graduated.

And I came because he holds the purse-strings.

If he leaves me enough money in his will, I plan to go back to America to pursue my dreams.

I don’t even understand his words at first. I blink. Look over my shoulder at my mother. “Excuse me?” Surely I heard that wrong.

“The man who will marry you. To protect you and manage your financial interests.”

Anger flickers on my father’s face, and my body instantly responds with trembling. No matter how much I try not to care, I’m still the little girl just dying to please him, to win his love. To make him see me and give me attention this time.

Of course, I never show it. I’ve played the rebellious teenager with him for a long time now. I toss my hair for emphasis. “I am not marrying anybody.”

He points a finger at me. “You will do what I tell you to do and be grateful I have found a way to protect and provide for you from the grave.” A little spittle flies from his mouth.

My stomach churns. It’s too disturbing to see death hammering his body and not to be affected, but I don’t want to care. I want to just hate him through it all.

I do hate him.

A tap sounds on the door, and my father nods, like he’s satisfied. Vladimir enters. “Maxim has arrived.”

I lose my breath like I’ve been punched in the stomach.

Surely not? What kind of sick, twisted plan of my father’s is this?

Maxim, the charming, powerful former protege of my father? The one I had exiled with my lies?

Maxim comes in, and I back away from my father toward the shadowed corner where my mother stands, hovering, wringing her hands. “You knew about this,” I accuse.

Tears swim in her eyes. I’m glad because they help me swallow my own.

“Maxim.” My father holds out his hand to him.

Maxim glances in our direction, and I make a move to leave, but my mother grabs my arm and keeps me in place. Vladimir, who also stepped into the room, shifts in front of the door like he’s blocking it. Like he’s a prison guard.

Nothing shows on Maxim’s handsome face. Just the sight of him after six years makes my heart pound. He wears the same inscrutable mask I remember. Surely he hates me after what I did. He clasps my father’s hand, going down on one knee beside the bed. “Papa.”

Papa. That’s what they call my father because he’s their leader. In a way, I supposed he was like a father to Maxim, who I recall ran away from an orphanage at age fourteen. Probably a better father to him than he ever was to me, his real flesh and blood.