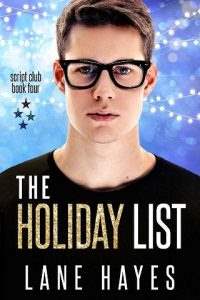 “No act of kindness, no matter how small, is ever wasted.”—Aesop

The hum of conversation faded quickly. All eyes turned to our dapper roommate fussing with the knot on his bow tie as he pulled his iPad from his computer bag.

“Hold up, Asher. Will someone pass me a throw blanket?” George asked, sneezing into the crook of his elbow. “It’s cold in here.”

“Our heater is on the fritz again.” Tommy tossed a blanket over before zipping his yellow down jacket up to his chin and burrowing into the red sofa between Holden and Topher.

“It’s a tad brisk,” I agreed, folding my arms around myself for warmth as I settled into the wooden chair I’d dragged close to the hearth. I shot up a moment later. “I’ll put the kettle on for tea. Or hot cocoa, if anyone prefers. It can be ready in a few minutes. I also made shortbread cookies.”

Asher smiled kindly. “That’s very nice of you, Chet, but I don’t want you to miss anything. We take our Script Club meetings rather seriously.”

“Oh, yes, of course.” I adjusted my glasses and nodded as I sat again. “I’m sorry. Please do proceed.”

Asher cleared his throat noisily and sat a little taller in the armchair facing the red sofa. “I, Asher Fitzgibbons, acting secretary of the Script Club, hereby call this meeting to order. We have a lot to cover, gentlemen. First, I want to give a quick recap of our last session. We successfully pooled funds to purchase an air fryer. I can buy it online or…”

I tuned Ash out. As the newest resident, I didn’t have much to add about the air fryer in question, other than having heard they were fabulous for making cauliflower tots. I’d happily contributed to the fund and was planning on perfecting the recipe as soon as it arrived, to thank my new roommates.

You see, I’d moved in three weeks ago after a mini catastrophe forced me to find an alternate living situation stat. Asher had told me that he’d had a devil of a time finding someone everyone in the household approved of to take Topher’s old room. He’d mentioned it at work over the summer, and while I’d sympathized with his plight, I hadn’t thought much of it until the toilet in my apartment exploded. Literally exploded. Not an exaggeration. There was water everywhere. I was still traumatized.

At first, I was just grateful to have somewhere to go and extremely grateful when they offered the room rent free until the first of November. The six-month lease I’d signed would give me ample opportunity to look for a condo of my own to purchase—something I’d been planning to do for a while. In the meantime, I genuinely liked my new living situation. Asher, George, Tommy, and Holden were good people. So were Topher and Cody, fellow scientists and founding members of the Script Club.