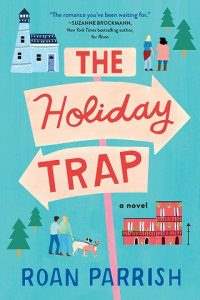 For fans of Alexandria Bellefleur and Alexis Hall comes a charming, hilarious, and heartwarming LGBTQIA+ romcom about two separate couples finding love over the holidays from acclaimed author Roan Parrish!

Greta Russakoff loves her tight-knit family and tiny Maine hometown, even if they don’t always understand what it’s like to be a lesbian living in such a small world. She desperately needs space to figure out who she is.
Truman Belvedere has just had his heart crushed into a million pieces when he learned that his boyfriend of almost a year has a secret life that includes a husband and a daughter. Reeling from this discovery, all he wants is a place to lick his wounds far, far away from New Orleans.
Enter Greta and Truman’s mutual friend, Ramona, who facilitates a month-long house swap. Over the winter holidays, each of them will have a chance to try on a new life… and maybe fall in love with the perfect partner of their dreams. But all holidays must come to an end, and eventually Greta and Truman will have to decide whether the love they each found so far from home is worth fighting for.

Snow fell in fat, picturesque flakes, fairy lights twinkled around the stage, and the hum of excitement and cheer that always attended the Owl Island, Maine, Holiday Fair electrified the town square.

Greta Russakoff stood in the center of it all and contemplated precisely how she would murder her entire family one by one.

It had begun as the Holiday Fair always did: Valentine Johnson, the mayor of Owl Island, turned on the lights that illuminated the town square and all the businesses that lined the four streets creating it. She called the Holiday Fair to life amid cheers and whoops from a familiar crowd. And then she called up the volunteers for their annual charity auction.

This year, the charity was the Owl Island Library, and the auction was for a dinner date at Francesca’s, Sue Romano’s Italian restaurant.

Only this time, after Valentine had called up the usual suspects, another name rang out.

“Our final volunteer is Greta Russakoff. Come on up!”

The smile of holiday cheer died on Greta’s lips, and for one tremulous moment, she thought she’d simply misheard. After all, there were six other Russakoffs in town. They stood all around her: her parents and her four sisters.

But that hope died the same death as her smile when she saw the faces of her mother and her eldest sister, Sadie, who were looking at her with twin expressions of satisfaction.

Her father was pointedly avoiding her eyes, as was her older sister, Tillie, the peacemaker. Her twin, Adelaide, blinked in horror at her but didn’t say anything. Her youngest sister Maggie’s mouth dropped open, and she mouthed Oh, shit, the words swallowed by the murmurs of the crowd.

“What,” Greta bit off between gritted teeth, looking between Sadie and her mother, “Did. You. Do?”

“Greta, are you here?” the mayor crooned into the microphone. “Remember, this is for charity.”

Valentine was beloved on Owl Island. She had increased tourism and revenue for small businesses, including the Russakoffs’.

Her heart sank as people began to reach out and pat her on the back and smile.

Could you murder an entire town?

“Go get ’em, kiddo,” Sadie trilled, and Greta wondered, not for the first time, why Sadie gloried in messing with her more than with anyone else.

You could just leave, Greta told herself. Just turn around and walk away. You’re an adult now, and this isn’t the damned hunger games. They can’t make you.

Greta squared her shoulders and cleared her throat. “I didn’t volunteer,” she said confidently and prepared to leave.

Only her words came out as a croak, and she didn’t leave.

She turned to Adelaide, looking for a rescue or help or…something. But while Addie looked horrified on her behalf, she just shrugged, an I-don’t-know-what-to-do gesture familiar from every awkward situation of their childhood.

“Dude,” Maggie said to Sadie. “You’re such an asshole.”

“Greta, go,” her mother hissed. “It’s for charity!” Nothing scandalized Nell Russakoff like a lack of performative generosity.

Owl Island was a small town. Leaving would mean answering questions for weeks. Which would mean offending people about the auction, a beloved town tradition. Which would mean even more talking to people who’d known her since she was a child and still treated her like she was one.

Greta gritted her teeth so hard she felt a headache threaten and walked stiffly to the stage, taking care not to meet anyone’s eyes lest she perish from mortification or reveal previously unknown Medusa-like powers. She stood next to the other volunteers with what she hoped was dignity but would see in pictures later was the pose of someone who desperately needed to pee.

One by one, the volunteers were bid on.