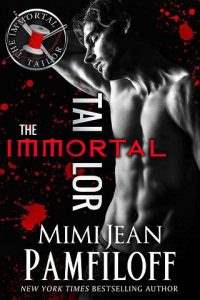 “Come on. Hug me. Just one little squeeze?”

Damien Greystone set his fabric shears on the table and glared at the white furball with golden eyes. “No. And stop begging. I fed you last week.”

Damien returned to cutting out what would become the sleeve of a classic gray tweed coat, made by hand. The correct way. As his father and his grandfather had done before him. Being a tailor wasn’t merely a family trade, it was an art, and this workshop was his sanctuary.

Along the walls, handmade oak drawers—some shallow, some deep—were filled with reams of fine fabrics and every color thread imaginable. An adjustable mannequin stood in the corner between towering piles of boxes he lacked space for in the overflowing stockroom next door.

In some ways, his store was a reflection of himself. Organized yet chaotic.

Damien growled with frustration, knowing exactly how this argument would end: Him getting annoyed to death and losing another day’s worth of work. “If I do this, Bonbon, you must promise to leave me alone the rest of the week. I have three suits to finish on top of this coat. And no more wetting the goddamned floor or leaving your ‘little treasures’ in the fitting room.”

The small beast jumped up on its hind legs, dancing in a circle. “Yes! Yes! Deal!”

“Fine.” Damien removed his black apron so as not to cover it with white fluffy fur. He set it on the sewing table and opened his arms. “Come on then, Bonbon.”

Bonbon jumped into Damien’s arms and slumped against his chest, groaning with delight. “Hmmm…delicious. Now stroke my ears, you dirty prick.”

Damien shook his head. “You have a vile mouth.”

Damien massaged the soft little ears between his fingers, loathing every second of it.

Damien swiveled toward the doorway leading from his workshop to the storefront. Standing there was none other than Cimil, the Goddess of the Underworld. Today she had her flaming red hair neatly braided back, and she wore an unflattering camo outfit with army boots. Entirely suspicious. Cimil generally dressed in wild, sparkly outfits meant to annoy or distract her enemies.

“Cimil, welcome back to Greystone and Sons. Always a pleasure. I assume you are here to be fitted for your new winter solstice tutu?” A bizarre summer tradition for the insane deity.

Damien set down Bonbon, his love-sucking demon, playing it cool. By order of the gods, demons had been banished back to their realm. They were known troublemakers. But Bonbon had saved his life once, and it felt wrong to rat him out. While the demon realm was supposedly a fun and lively place, it lacked a steady food source for Bonbon’s particular subspecies, who fed off affection. In fact, to Damien’s knowledge, love-sucking demons were practically extinct. Yes, Bonbon was one of the last. And yes, he was a bottomless pit of need, always begging for attention. Not so dissimilar to a real Chihuahua.

Bonbon gave Cimil a growl as he trotted past her to seek refuge in his little bed at the front of the store. Damien had hand sewed it from a tuxedo shirt, even adding a little bowtie on the corner.

“No, I am here for another reason. A serious one,” she said, her voice stern.

Why was Cimil speaking like that? Where was the twang? The sass? The odd little nicknames she infused into her sentences, such as “cupcake,” “man treat,” or “shitfabrains”?

“How may I be of service?” Damien dipped his head, a sign of respect. “Always treat the customer like a queen or king,” his father used to say. But Damien didn’t kiss ass because he needed the money. Playing the role of a well-mannered gentleman was the only thing preventing him from going off the rails. Deep down, he was anything but civilized.

“I’m going to shoot straight with you, D-Man. We have a situation, one that requires your expertise.”

“Another naked clown party?” He hoped not. It would mean sewing a bunch of hideous sparkly hats. He was a damned tailor, not a costume designer.

“No. The circus left town last month, but I believe my sister, Ixtab, paid you a visit recently?”

That’s what this is about? Ixtab, Goddess of Suicide, had come into his shop looking very…well, normal. No black lace over her head or Morticia dress. Instead, she had worn flip-flops and a yellow summer dress. “Greystone,” Ixtab had said, “we need you to sort out a situation. You will call my brethren, set up meetings, and get the details. I will be on vacation. Permanently. Good luck.” Ixtab then turned and left, getting into a car with some man who kissed her wildly. The two made out until a cop came by and urged them to take it to a hotel.