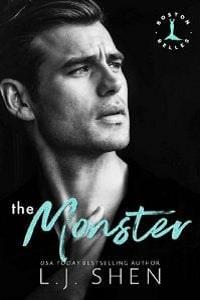 “You Are in Love with a Psycho”—Kasabian

“I’m Not in Love”—Kelsey Lu

“The End of the World”—Skeeter Davis

“What would an ocean be without a monster lurking in the dark? It would be like sleep without dreams.”

This is the last time you ever cry in your life, shithead.

That was the only thing that went through my head when the woman who gave birth to me punched the doorbell five times in a row, clutching the back of my shirt like she was disposing of some punk who’d TP’d her house on her neighbor’s doorstep.

The door to Uncle Troy’s penthouse swung open. She shoved me past the threshold.

I flung myself into the arms of Aunt Sparrow, who staggered backward, pulling me to her chest in a protective hug.

Sparrow and Troy Brennan weren’t really my aunt and uncle, but I spent a lot of time with them—and by ‘a lot’, I mean still not enough.

Cat, AKA the woman who birthed me, was giving me away. She’d made up her mind tonight when she’d passed by me, on her way to her bedroom.

“Because you never fucking feed me.” I flung my joystick to the side, giving her stink eye.

“You’re, like, ten or eleven, Samuel! Make yourself a sandwich.”

I was a nine-year-old and a malnourished one at that. But she was right. I should make myself a sandwich. I would if we had the ingredients for it. There weren’t even condiments in our house, only drug paraphernalia and enough booze to fill the Charles River.

Not that Cat cared. She was blind with rage because I stole her cocaine and sold it to some wiseguys down the street then used the money to buy four McMeals and a Nerf gun, when she left me unattended tonight.

Grandma Maria was the one who did the heavy lifting when it came to raising me. She lived with us, working two jobs to support us. Catalina was in the background, like a piece of furniture. There, but not really. We lived under the same roof, but she moved out whenever her boyfriends were whipped enough to let her stay with them. She went to rehab centers, and dated married men, and somehow had money to buy expensive bags and shoes. Kids at school kept telling me their dads said Cat knew the curve of every mattress at our local Motel 6, and even though I wasn’t sure what it meant, I was sure it wasn’t good.

I once eavesdropped on Uncle Troy telling her, “He is not the fucking Hamptons, Cat. You can’t visit him periodically, when the weather allows it.”

Catalina had told him to shut his trap. That I was the worst mistake she had ever made while she was high.

That day, I got expelled. Beat the shit out of Neil DeMarco for saying his dad and mom were getting a divorce because of my mom.

“Your mom’s a slut, and now I have to move to a smaller house! I hate you!”

I’d given him a different reason to hate me by the time I was done with him, one he would always remember because it changed his face.

When Cat picked me up, she’d yelled at me that she’d fuck up my face like I’d done to Neil, but I wasn’t worth breaking her new nails over. I’d barely heard her. Everything inside my head was swollen from the fight and from thoughts that made my head hurt.

But I knew she’d be too cheap to take me to Urgent Care, so I didn’t complain.

“All ours?” Aunt Sparrow narrowed her green eyes at Catalina. “What are you talking about? Today is not our day with Sam.”

Aunt Sparrow had red hair and freckles and a body like a scarecrow, all bones and skin. She wasn’t as pretty as Catalina, but I still loved her more.

Cat rolled her eyes, kicking the duffel bag with my stuff. It hit Uncle Troy’s shins.

“Don’t pretend like you haven’t been gunning for this all along. You take him on your family vacations, he has a room here, and you go to all his soccer games. You’d breastfeed him if you had any tits, which sadly, you don’t.” Catalina swiped her eyes along Sparrow’s body. “You always wanted him. He’ll complete your boring little family, with your boring little daughter. Well, it’s your lucky day, because the asshole is officially yours.”

I swallowed hard and glared straight ahead at the flat screen TV behind Sparrow’s shoulder. Their living room was a mess. The good kind of mess. Toys strewn everywhere, pink fluffy blankets, and a purple, glittery toddler scooter. Brave was playing on the screen. It was Sailor’s favorite movie. She was probably asleep.