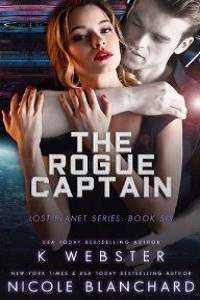 I pound on the control panel with a metal rod I found hanging from the ceiling in the supply closet of the Mayvina, loving the way it echoes. Molly says that the beat I like to make is called music. I’ve never heard of music, but I’ve heard of singing. Both Molly and Aria do it all the time. Sometimes, I think up beats to go with their pleasant words. Sometimes I feel like I belong to Earth II instead of this decaying planet.

My ship purrs beautifully as we coast above the clouds with the great unknown above us. I admire the sparkly stars against the black backdrop and wonder if there are other planets besides this one and Earth II. Other women…

Because, the one that makes my cock weep like a fussy mortling whenever she’s near, hates me. Loathes my very existence.

I drop the metal rod and Willow all-too-happily kicks it into a corner before dropping into the co-captain’s seat.

“What?” I ask, lifting a brow as I rake my gaze down her front, lingering on the way her ample breasts strain against the fabric.

Rekk how I tried to be attracted to one of the other humans.

Zoe offered to gouge my eyes out if I even thought of looking her way. Lyric found something pleasing within Hadrian—though I can’t imagine what. And the other humans there were simply terrified of my existence.

My eyes were for only one.

“I like that shirt,” I say, trying to be amicable.

“Of course you do,” she mutters. “Because you can almost see my tits. I’m surprised you stopped staring at your own reflection in the glass long enough to consider someone else besides yourself.”

“You can almost see them,” I state. “I’d probably stop looking at me if you showed me more of you.”

“I’ve only really tried it on you,” I offer.

“Doesn’t make it any better. You’re like those guys back on Earth II who think they’re the bees’ knees.”

I’ve heard Molly say this before.

“Ugh,” she groans. “You’re a hyperactive frat boy goofball with a license to drive a spaceship who thinks his balls are the biggest on the planet. Over it.”

Energy thrums through me now that she’s actually speaking to me. We’ve been in the air for one solar of our projected four solars’ travel, and all I get are hisses and grumbles. This feels like progress.

“If you’re referring to my sac, I imagine it is the largest and most appealing to the eye.” I waggle my brows at her before spinning in my chair and stopping again to face her. “I could show it to you so you could properly make that determination yourself.”

I laugh and shrug. “Been called worse.”

I check off the first two with my fingers and then frown at the last one. “What’s a player?”

“You, Theron! I saw you flirting with every woman with a pair of tits. It’s gross. Here I almost bought into the whole ‘the morts were lonely and dying and looking for mates’ BS my mom and everyone else who’s been drinking the Kool-Aid spouts. Hell, even Lyric of all people has fallen into that line of thinking. But I see you, douchebag. You’re a player that given the time, you’ll sleep your way through the entire prison just because you can.” Her breasts jiggle after her long-winded rant. “Seriously, can you not look at my tits for like three seconds?”

Rekk, her breasts are lovely.

“You know, screw it. You want them so badly. Have them,” she says, emphasizing her words by grabbing them and making my cock lurch in response. “Back home people have casual sex all the time to scratch an itch. Then, they can move on to their real matches. It’s called kissing a few frogs to find your prince. Who knows, maybe my prince is waiting for me at the Facility. I’m into the nerdy quiet type. Got anyone like that?” Her face is red from fury and she’s never looked more beautiful.

“You want to mate with me?” I ask, astonished.

It must be my dazzling smile that finally wore her down.

A laugh escapes her, making my heart skip a beat. “I feel like this is my own personal hell. What did I do to deserve this?”

“Am I supposed to answer that or is it a ridiculous question?”

She snorts. “Not ridiculous—although yours was—it’s called a rhetorical question. And you’re not supposed to answer.”