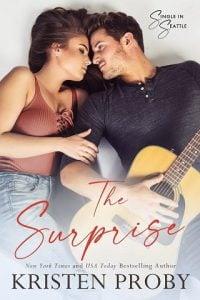 God, I’m just tired all the way to my bones. I love being a nurse. I’ve known since I was a little girl that I wanted to work with patients, but some days, it just kicks my ass.

Or, maybe I should say nights. Because I work the night shift in the Seattle General emergency room, and there is never a dull moment.

Especially on nights like last night—on a full moon and Halloween.

There were moments I couldn’t tell the difference between the fake blood and the real stuff—which can really be an obstacle to a girl’s job.

“Good times,” I say on a sigh as I start the car and lean my head back on the seat for just a minute, enjoying the quiet as the sound of the radio fills my car, and my mind empties of last night’s chaos.

I sit up straight and stare at the radio in shock.

Images immediately fill my head: Brax and me in the bathtub; him sitting across from me while playing his guitar and singing the song he wrote for me.

“This is the number-one-requested song this week here at KPTY Pop Radio, and I’m excited to welcome Brax Adler himself into the booth with me. Hey, man.”

“Thanks for having me.”

God, I’d recognize that voice anywhere. Smooth as silk and wrapped in sin. Brax has the voice of them all.

He could melt a girl’s panties off with one little whisper.

I should know. In the three years I was with him, I hardly ever had my panties on.

“I love that this song is getting nationwide attention, Brax. You must be thrilled.”

“It’s pretty dope, yeah, man. The guys and I are stoked.”

“You’ve been a mainstay in the Seattle music scene for a few years now, and I have to tell you, we’re all rooting for you.”

“I appreciate that, thank you.”

“Now, let’s talk about My Girl. Who wrote the song?”

“I wrote it a few years ago,” Brax answers.

“Is it about someone, or is it a work of fiction?”

My heart stutters as I hold my breath and chew on my bottom lip.

“Well, I wrote it for my girlfriend at the time,” Brax admits. “But, she dumped me.”

“What?” I demand, not even hearing the DJ’s response. “You little liar. You backstabbing piece of crap. That’s not how it happened, and you know it!”

I shut the radio off and pull out of my parking space, fuming.

After all the shit that man pulled, now he’s going to lie on the radio?

I shouldn’t expect anything less, really.

I’m still pissed when I pull into the garage of the little townhouse that I share with my twin sister. When I walk into the kitchen and hear the radio playing, Brax’s stupid, sexy voice flowing through the speakers, I narrow my eyes on Maddie.

“Why are you listening to this?”

“I wondered if you’d heard it,” she says with a cringe and taps the screen of her phone to shut it off. “Just ignore him. He’s an idiot.”

“But I didn’t dump him,” I insist as I open the fridge and rummage around for my dinner. It may be six in the morning, but it’s dinnertime for me. I pull out all the makings for a salad and baked chicken and start chopping veggies on the island.

“I’m not sure you should have a knife in your hand when you’re this pissed off,” Maddie says, backing away slowly while eyeing the knife.

“You know what really pisses me off?” I ask and point the sharp end of the blade at her. “He could have just said, ‘Oh, it just didn’t work out with her,’ or something just as vague. Instead, the prick lied.”

“Par for the course with that guy, right?”

“No. He wasn’t a liar when we were together. I don’t know why he’s starting a life of deception now. It’s weird.”

“Okay, I think you need to forget about Br—He Who Shall Not Be Named,” she amends at my cold stare, “and tell me about your night. Were you busy?”

“Full moon on Halloween? Yes, we were busy.”

“You see the best stuff,” Maddie says as she sits on the stool and watches me get my chicken ready to go into the oven. “My job isn’t that exciting.”

“You’re an accountant,” I remind her. “If you saw blood and guts at your job, that would be a red flag.”

My sister snorts and nods. “True. And, unlike you, blood makes me sick. Okay, I have to go into the office, but I should be home around noon since it’s Friday. I’m taking a half-day in case you want to hang out or something.”

“Hopefully, I’ll be passed out until about five. I work again tonight.”

“I’ll be quiet then,” she says with a wink. “Sleep well, and don’t let Brax get to you. He’s old news. Who cares if he’s suddenly famous? It doesn’t impact you at all.”