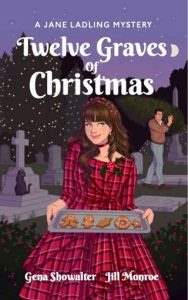 Jane Ladling presents the perfect fail-proof recipe to spice up the holidays. Or ruin them. Baker’s choice!

Mix a murderous cat with a goofy corgi. (Ignore any hissing. That definitely probably means the two ingredients are blending amazingly well.) Then add a landlocked cemetery allegedly peppered with gold-stuffed coffins. Whisk in a gravekeeper convinced a family curse forever dooms her to lose any man she loves. Marinate with a ridiculously charming ex-special agent whose muscles and lopsided smile make her forget said curse. Toss in a pinch of mystery courtesy of an old, coded treasure map and crank up the heat. Broil, baby!

If no one dies, serve with a smile. If they do, smile wider.

And maybe, just maybe, Jane can solve a series of bewildering clues, end the curse for good, and finally find her own happily ever after. Or not.

The invader has encroached upon my territory again.

His name is Conrad Ryan. And yes, his daring is commendable. But I do not commend him! He is such a foolhardy human. How can he not know I, Cattain Rolex Ladling, am not a feline one trifles with? Not without consequences, anyway. I am royalty! His Royal Highness the King of Dead Mouse Court, Prince Of Cattitude, Duke of Purry, Earl of Mayhem, Baron von Murder Mittens, Royal Knight of Clawsovenia, Distinguished Member of the Order of Whiskerus Maximus, Grand Master of the Furian Empire, Guardian of Disorder, Royal Chief of Chaos, Lord Ravendeath of the Garden’s Most Honourable Kitty Council, Personal Aide-de-Camp to Her Majesty’s Slightest Whim, and Lord High Admiral of Bughuntland. My rage knows no bounds!

Though I’ve attempted to slay the scourge with my glare two hundred thirty-three and a half times today, he has somehow survived.

I hunger for vengeance. I thirst for his pain.

After I complete my six-to-twelve-hour evening nap in the bowl on the kitchen table, grab a quick snack, assassinate a feather, cough up a hairball, knock over a vase, and perform a total body licking, I will ensure he regrets being born.

He should be quaking with fear. I’ve already sharpened my claws.

The usurper deserves only misery! He has ruined Christmas for me and my servant-queen, Jane. I’ve done everything in my immense power to remind her of happier times without the male. Stared at her unblinking for endless minutes. Removed annoyingly shiny orbs from our new indoor tree. Shredded hats and shoes to give them added flare. Yet, she is crying. Again. And he is responsible.

It shall be my privilege and honor to ensure he pays for every illicit teardrop.

When I first met Miss Jane, I made a quality decision to accept her worship as my due. I even vowed to protect her with each of my nine lives. In a surprise twist even I myself did not see coming, I have decided to keep my word. Turns out, she… isn’t terrible. I sometimes enjoy tolerating her even though she always melts at the sight of Conrad’s annoying smile. And his equally annoying frown. Still, I’m willing to go to great lengths to facilitate her happiness.

My enemy’s puny mind cannot even begin to fathom the lines I’m willing to cross to accomplish my goal. I’ll make him rue the cold November morning he moved into my cottage and—oh, a bird!

In The Twelve Days of Christmas song, everyone focuses on the partridge. I say concentrate on the pear…shaped diamond. What better way to break a curse than a holiday proposal?

“Conrad told me he loves me, and he’s moving to Aurelian Hills.” Jane Ladling knelt before the crackling hearth in her living room, going through a tattered box of fall decorations. She’d found the treasures in the old business center of her ancestral “estate,” a landlocked cemetery named Garden of Memories. “The nerve of some people!”

Conrad Ryan. The Prince of Spices, thanks to his incredible scent, moving to her small town. For good. Being his ridiculously charming self. The horror!

“I assure you,” she said primly, “I responded as calmly and rationally as possible and did the most logical thing. I broke up with him and got out of there fast.” For a good reason!

Like all the women in her family, Jane was cursed. Fall in love with a guy and lose him. That wasn’t the worst of it. If a breakup didn’t take and a Ladling lady married the object of her affection, she all but signed his death certificate. Zero exceptions. A fact she hated even acknowledging.

None of her female relatives had ever beat their significant others to the grave. Grandma Lily lost Pops to a heart attack. Great grandmother Opal just straight up lost great grandfather Benjamin, who vanished one night, never to be heard from again. Opal did remarry years later, once Benjamin was pronounced dead, but the second husband died in a freak accident. And those were the tame stories in Jane’s family tree.