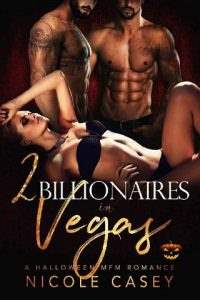 My shoulders slumped as I hung back, watching my friend Greer walk up to the front desk of the hotel and ring the bell. She looked back at me with a cheery smile while we waited and I did my best to return it. I just hoped she didn’t notice how fake my smile was.

I so did not want to be there, but none of that was Greer’s fault. She was getting married. She had every right to be happy. As one of her best friends, I was supposed to be happy too, happy for her that she met such a great guy she wanted to spend the rest of her life with.

And I was happy. Mostly, anyway.

No, the fact that I struggled to be in a good mood was my own issue. Like my best friend Sascha said, I needed to just put my own shit on hold for the next week and a half and celebrate Greer and John.

Besides, Sascha had her own stuff going on and she’d managed to temporarily compartmentalize with ease. Outwardly, at least. I knew she was hurting, but she could put on a brave face for the people she loved. Still, Sascha wasn’t a bridesmaid and didn’t have to be here for the entire week and a half either.

“You know she’d do the same for you if the roles were reversed,” Sascha told me earlier in the day when I called her. I could just picture her sitting there with that apprehensive expression on her face, brows scrunched and mouth set in a line. She always got this when she was worried about something and I’d born witness to it more times than I could count. Thankfully, it wasn’t usually directed at me.

Sascha had known me forever and always knew exactly what to say to me. Usually her words didn’t exactly make me feel better, but they were often what I needed to hear.

“You got me there, Erin,” Sascha said. “I know it’s Greer’s favorite holiday, but it does seem a bit silly.”

It had been Sascha’s chuckles from my complaining that finally put me at ease. Yes, I was hurting, but I hadn’t lost my ability to make my best friend laugh. That meant I’d be okay. Eventually.

It was a calming thought.

Greer looked so happy when she began walking back towards me. Actually, she was radiant, her smile so wide, her eyes bright and full of hope. I felt a little guilty for my dark thoughts, but a therapist once said, “We feel what we feel,” and that seemed right. I couldn’t help how I felt, but I didn’t have to be a drag on Greer. No way was I going to spoil her time.

“We’re all checking in!” she said. Her dark blue eyes were filled with such happiness that I was suddenly glad I’d sucked up my sour mood and forced myself to come. Greer really did deserve it.

Greer and I first met in college in one of our classes during Freshman year. She sat down next to me and immediately began chatting like we were old friends. I remember sitting there in that 8 a.m. class, nursing a large coffee, a little hungover from the night before, and feeling sideswiped by this woman who sat down next to me.

Pixie was my first thought of her, and it wasn’t just because she had her dark hair styled in an adorable pixie cut. No, it was her entire demeanor. Sure she fitted the description of a pixie--a small build, pale skin, an undeniable effervescence about her--but it was so much more than that. It was her personality, her bubbly demeanor. I was a little jaded, cynical, but it didn’t take long for Greer to break through my walls and befriend me. Eight years later, we’re still great friends and I value that relationship, Greer’s presence in my life.

“All checked in!” Greer said. She handed me my keycard and I slipped it in my pocket.

My smile began as fake, but quickly became real at witnessing Greer’s joy. “Awesome,” I replied, “thank you!”

“Of course,” she said, slinging her arm around me as we walked out to the car to grab our things.

Our rooms were on different floors, so before we went our separate ways, Greer wrapped me in a hug, squeezing me tight. “I really appreciate this, Erin,” she said. “So much.”

I knew Greer meant every word of it too. No one was more sincere than Greer.

We reached her floor and she grabbed her things and get off. “Don’t forget about tonight!” she said merrily.

“I won’t!” I replied before the elevator doors closed behind Greer, though I was already dreading it.

It was easy to slip back into my dour mood once I was out of Greer’s presence. My resolve to be there for her was still strong, but that didn’t really help my moodiness while I was alone.