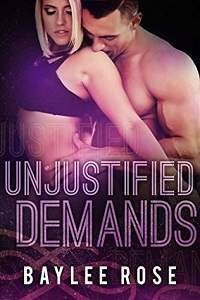 I’m looking out over the one-way window of my upstairs office that shows the bar and dance floor below. Here I was, thinking it was going to be a slow night. I own one of the premiere night spots in Miami, and for the most part, things run smoothly. I have my fingers in a lot of pots though, so I can’t help but worry about what Joe deems as a problem.

“What’s up, Joe?” Big Joe is my right hand and my number one bouncer. He can usually handle anything, so for him to come to me is enough to set off warning bells. I swivel my chair back around to look at him.

“That kid you caught trying to sell his shit in the club last week?”

“I fail to see why this concerns me, Joe.”

It sounds cold. Then again, I am fucking cold. Still, I gave the kid two chances to stop pushing his crap in my club. He didn’t listen. The way I see it, three strikes and you’re out. I’d already been more lenient with him than I would be others. He was so fucking young. Twenty-one. Young, dumb, and full of cum. Hell, at forty-two, I’m starting to think I’m too damned old to be doing this job anymore. I have money—more than enough money. Maybe I should just seek out some sandy beach out of the country and call it a day. Greece, my mother’s family was from there. Even if my mother was a fucking bitch, maybe I’ll find some affinity for the country.

“His sister’s been making waves,” he tells me.

“Again, why do I care?” I ask, taking a drink of my Scotch. It’s aged perfectly and the burn soothes me going down.

“She’s been talking to the cops.”

“Fucking hell. What does she know?”

“Not a lot. But you know the badges. They hear your name and they’re going to come running.”

I sigh. He’s not wrong. They just hear the name Roman Anthes and they come poking around, descending on my club, my company, and any holdings I have. Since I’m trying to broker a deal to get into bed with the Russians, that could be disastrous right now.

“Where is this sister?”

“I haven’t hired anyone here at the club in months,” I argue. I’m very careful about the workers I hire here. I make sure I have them all vetted carefully and meticulously.

“Not here. She started work at the Dive.”

“Waitress?” The Dive is a strip joint on the edge of a low rent side of town. I won the fucking thing in a card game. Had plans for selling it off, just haven’t got around to it yet.

“Dancer. You gave Yoly the okay to hire her a couple of weeks ago. She’s starting to get pretty popular. Yo says business has tripled since she started.”

“Does she have any idea who she works for?”

“Don’t see how she could, boss. No one knows you own the Dive, and those papers are buried and tangled so deep, even the feds couldn’t find them.”

“Sure thing.” He hands a plain manila folder to me and I let it stay on my desk, thinking.

“What do we have on her?” I ask, opening the folder and moving my fingers over the glossy 5 by 7 picture stapled to the application. It’s a blonde with medium-length hair which is cut to curl toward her face and accent her strong cheekbones. Her eyes are violet. I never knew they made eyes that color. I have all my dancers photographed in nothing but their underwear, and she’s definitely got the body to make men beg. I thumb through the rest of it quickly.

“Just what’s in the file, boss. Well, that and obviously her affection for her brother.”

“What did we do with the little fucker?” I ask him. My eyes keep going back to the photo of the blonde.

“He’s at the warehouse. You have him in one of the containers.”

“No, but only because Bruno has been out for his kid’s surgery.”

“It was a success, thanks to your generosity. Bruno says they even said Thomas would be able to walk after some therapy.”

“Good, good. Tell Bruno to hold off. The kid might prove to be useful.”

“What are you thinking?”

“I’m thinking the asshole might yet prove of use to me,” I tell him without expanding. He knows me well enough that he just closes the door, leaving me to my thoughts.

Ana Stevens. The pretty blonde dancer has no idea what trouble she just landed into. I reach down and adjust my cock because the son of a bitch has been rock hard since I laid eyes on Ana’s picture. Why does it suddenly feel like, despite everything, my day is looking up?