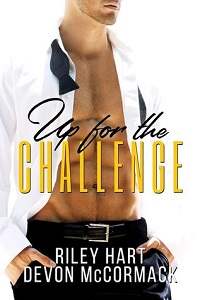 I fucking loved to win.

I sat behind my desk, an electric current zipping through my veins. It had been important as shit for me to nab that contract today—partially because I’d wanted it, wanted this design more than I’d wanted anything in a long time, but also because it was good for my career and no one had thought I could do it. I hated it when people doubted me. I’d worked my ass off to be the best architect I could be, and I was damn good at it. That’s why people didn’t typically doubt me for long.

I should do something to celebrate.

Fiddling with my cell, I saw an unread message from Amber, a woman I hooked up with every once in a while. She was always down for a good time and I was too, so it worked.

Just as I was about to pull up the text to reply, there was a knock on my office door.

“Come in,” I called out. The door opened and a blonde head peeked inside. Sadie was gorgeous. She had long hair, a pouty mouth, and killer legs. If she didn’t work with me and wasn’t the closest thing I had to a friend, I would have wanted her beneath me.

“Hey! We’re going to Wreckage to celebrate tonight. Do you want to come?”

I frowned. I was familiar with the popular bars and clubs in LA, but I hadn’t heard of that one. “Wreckage?”

“Why are we going to a gay bar to celebrate my accomplishment?” I teased and she rolled her eyes.

“We’re not. We’re going to a gay bar to celebrate Owen’s birthday. Not everything is about you, ya know?”

“Most things are.” I winked, and when she didn’t reply, I added, “Okay, maybe not most things but all the important ones.”

“Do you want to go? Or do you have plans with whatever chick you’re fucking this week?”

“Hey! I resent that!” I sat forward in my chair. “I’ve known Amber longer than a week.”

“Oh my God. I really do hate you. You can hang out with Amber any time. It’s Owen’s birthday. I know you don’t like getting close to anyone—big strong man needs no one and all that, but we’d like it if you came.”

“I like to come too.” Hence the reason I was thinking Amber was a better option than a gay bar.

Sadie stepped inside and crossed her arms. “Fine. Pretend you’re too good for us because Lord forbid you treat us like friends. Unless…oh, never mind. I get it.”

“For someone who works with me, you are taking quite a few liberties right now.” I wasn’t sure why she was acting like this. Sadie was one of the only people I spent time with from work and I liked Owen. We’d had lunch together a few weeks ago.

“Please. I know you. You’re all bark and no bite.”

“Why do you insist on being wrong about me today? I assure you, I like to bite…and I’ll also play along with your game. What did you mean when you said, ‘never mind’?”

“I get it. Not all men are secure enough in their sexuality to go to a gay bar. It’s ridiculous, but whatever.”

I couldn’t help it; I laughed. Loud, boisterous laughter because she had to be kidding right now. “Okay, that was a good one. I think we both know being secure has never been a problem for me. Nice try on the reverse psychology there. I’m beginning to wonder why you want me to go so badly.…”

This time it was Sadie who laughed. “Um…no. I don’t do cocky. I swear you drive me crazy sometimes.”

It wasn’t the first time I’d heard that, and I doubted it would be the last. I knew I was a lot to handle…but most people liked handling me, so it worked. I couldn’t say that was always the case about myself, but I tried not to think about that shit. The past was the past.

“I would love to go to Wreckage with you guys tonight,” I finally answered because why not? I was always up for trying new things. I’d never been to a gay bar before, but I wasn’t kidding when I told Sadie I had no problem going. I wasn’t that guy who thought all gay men would hit on me because they were gay, and even if someone did, I could handle myself. There was nothing wrong with a little flirting.

“Great. We’re meeting at the restaurant next door at nine—Angelo’s.”

We chatted about work for a few moments. Soon, Sadie said good-bye and left. I finished up a few things, ignoring my phone because I knew if I checked my message from Amber, I’d likely end up with her tonight.

The office was quiet when I made my way out. It was extremely rare that I wasn’t the last one to leave, but the firm was my life. It was the only thing that never expected something of me. It was my father’s dream brought to life, and I’d be damned if I didn’t take that seriously.