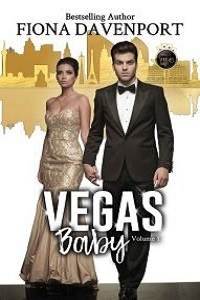 This collection contains the first three novellas in the Vegas, Baby series.

When Andrew Lennox spotted Autumn standing at the registration desk of his Las Vegas hotel, she was instantly his obsession. With Autumn leaving to spend a year abroad, their time was limited. But Drew was determined to use every second convincing Autumn of what he already knew. She was his. And no matter how long she was gone or how far away, that would never change.

“Knox, have one of your guys check on table six. Valerie pressed her in-house silent alarm.”

Knox Dawson, my head of security and best friend, nodded and silently left the security room. There were more than fifty monitors in the room, keeping track of well over two thousand cameras. A lot of casinos would rather buy more slot machines than focus on security, but I didn’t take the same attitude. I wanted my employees and patrons to be as safe as possible. Each table had two buttons for the dealer. One alerted hotel security, mostly used to handle rowdy patrons or possible cheating. The second was directly to the police in case of a robbery.

I brought my eyes back to table six and saw that Knox had sent Paul who was now bent low and speaking to a man with a small stack of chips and a glass of what I presumed was alcohol. The man threw up his arms, knocking his drink and chips off of the table. Paul tried to speak one more time but when the man began yelling, another guard showed up and the two of them “escorted” him out of the casino.

“Whoa,” said one of the guys watching the monitors. “Check out the babe in the lobby. Day-um.”

My eyes strayed to the screen showing the check-in desk. It wasn’t hard to know who they were talking about and to my shock, lust blasted through me and a dark sense of possession followed in its wake.

I was thirty-two years old and I already owned one of the most successful hotel and casinos in Las Vegas. Building the Lennox Hotel & Casino had been my dream and I’d pursued it with single-minded focus. Women had been the last thing on my mind. As evidenced by my last few relationship, which broke up because the women felt neglected. I’d shrugged and moved on. It wasn’t as if I hadn’t warned them beforehand. Eventually, having a relationship felt like more hassle than it was worth. It had been years since I’d been with anyone, and in all that time, I hadn’t even felt the craving to find a bedmate. So, the desire currently pumping blood into my cock was a complete surprise.

She was gorgeous with dark curly hair and a curvy body. I couldn’t see her face close enough to know her eye color, but I imaged they were dark to go with her hair and olive-toned skin. She was standing in the check-in line, her hand resting on the handle of a small carry-on suitcase. Hmmm, she wasn’t intending to stay long, but the fact that it wasn’t a simple overnight bag told me that I wasn’t in a complete rush.

“I don’t swing that way and even I would consider tapping that,” drawled Karyn, one of the few females on my security team. Chuckles echoed around the room.

“She’s off limits,” I snarled, my tone so harsh it drew every eye to me. “No one touches her, no one even goes near her unless it’s to protect her.” My face hardened and my tone became steely, letting them know I wasn’t fucking around. “Is that clear?”

Eyes wide and mouths slack, every one of them nodded without comment. I could only imagine what they were thinking. Normally, I’m very easy-going and known for my rational thinking and patience. Unless you fucked with me, my friends and family, my business, or my employees. Yeah, I had another reputation in Vegas, one that ensured that people most certainly knew not to piss me off.

With one last glare of warning, I left the security room and strode purposefully towards my office. Once I was inside, with door firmly shut, I dropped into my desk chair and pulled up multiple feeds for the lobby camera on the wall of television screens. I picked up the phone and punched the code in for the check-in desk.

“What can I do for you, Mr. Lennox?” a perky voice inquired.

“The woman in line, the one in the green dress, with the dark curly hair.”

“When she gets to the counter, text me her name. And, tell her we lost her reservation and for the inconvenience, we’ll upgrade her room.”

“Um, okay,” the desk attendant mumbled. “What room do you want me to put her in? We’re booked solid, Mr. Lennox.”