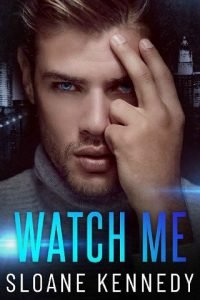 I couldn’t say the same for my opponent, though, because as soon as Dannie’s sultry voice came over the PA system, Harvey dropped his shoulder just a bit and it was over. With one subtle shift of my elbow, I dodged his defensive stance and nailed him in the jaw. The man, who outweighed me by a good fifty pounds, went down hard and heavy, causing the whole flooring of the aging ring to shudder beneath us.

“Fuck!” Harvey snapped as he slammed his gloved hand on the ground next to him. “Dannie!” he moaned in annoyance as soon as he realized that we had an audience. A good dozen men who’d been training on the weights and mats around the ring had stopped at some point to watch Harvey and me spar, and most were now chuckling.

“Harvey, was it your name I called just now?” Dannie asked, her voice ringing over the PA system. Since there was no way the spitfire secretary could have heard Harvey’s lamenting from her office, it could only mean one thing. I looked up into the rafters of the building and sure enough, there just outside the set of offices was Dannie with the PA microphone in hand. She was leaning against the railing, giving the guys below her a perfect view of her curvy body. Undoubtedly, nearly every set of eyes were either on her ample cleavage or her shapely backside.

“No, it wasn’t, was it?” she continued, her Southern twang ratcheting up a bit. “Unless you went and changed your name to Nik without tellin’ me,” she added, her eyes pinning Harvey even further to the mat.

“No, Dannie, sorry, I didn’t think—” Harvey began but Dannie cut him off with nothing more than a tightening of her lips. The man wisely shut his trap.

“Nik,” Dannie said into the PA microphone, “Mike needs to see you, sugar.” She shot me a wink and then turned on her heel and disappeared back into her office, giving the hungry men below another view of what I’d been told was an epic ass.

I was an ass man myself, but soft curves just weren’t my thing. Never had been, never would be.

As Dannie made her exit, I leaned down to offer my arm to Harvey. The fool still had his eyes glued to the rafters. “That ass worth dying for?” I asked in all seriousness. Harvey must have heard something in my tone because his eyes quickly jumped to mine. “You ready to tell some woman that her husband is gone because you were focused on your hard-on? You know how you’re going to explain to some kids their parent isn’t ever coming home again because you were looking for your next fuck instead of doing your job?”

The humor in the room deflated faster than a popped balloon.

I left Harvey where he was lying and directed my comments to the small group of men. “Is that good enough for any of your wives or girlfriends or kids?” I snapped.

There were several mumbled responses, but no one spoke up. It wasn’t until the guys started turning away that I heard muffled words like “hardass” and “dick.”

They were the exact right responses because I didn’t fuck around when it came to people’s lives. Not with those of the men and women we protected and especially not with those of the guys who made up the small team of bodyguards that worked for Smithfield Security.

I went to stand over Harvey and once again offered him my arm. He sighed and locked his forearm around mine so I could pull him to his feet. “Sorry, boss,” he muttered. I didn’t bother to correct the title because everybody had been calling me that from the time I’d started working for Smithfield.

“Focus,” I reminded him before I bumped his glove with mine.

I began working my gloves off as I left the ring. That familiar prickling sensation of knowing I was being watched had me quickly scanning my surroundings. I saw the company’s actual boss leaning against the railing where Dannie had been. Mike gave me a wave. I nodded in response and then grabbed a towel before making my way to the stairwell that led to the second floor. Mike was back in his office by the time I reached it. Dannie was handing him a stack of papers and explaining which ones needed his review. I waited in the doorway until they were done and as Dannie exited, I entered.

“Sorry, Nik,” she said as she flicked her eyes in the general direction of the ring.