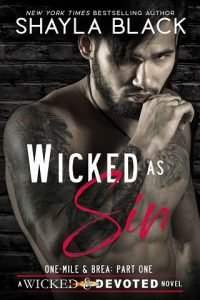 Finally, he had her cornered. He intended to tear down every last damn obstacle between him and Brea Bell.

For months, she’d succumbed to fears, buried her head in the sand, even lied. He’d tried to be understanding and patient. He’d made mistakes, but damn it, he’d put her first, given her space, been the good guy.

Fuck that. Now that he’d fought his way here, she would see the real him.

One-Mile Walker slammed the door of his Jeep and turned all his focus on the modest white cottage with its vintage blue door. As he marched up the long concrete driveway, his heart pounded. He had a nasty idea how Brea’s father would respond when he explained why he’d come. The man would slam the door in his face; no maybe about that. After all, he was the bad boy from a broken home who had defiled Reverend Bell’s pretty, perfect daughter with unholy glee.

But One-Mile refused to let Brea go again. He’d make her father listen…somehow. Since punching the guy in the face was out of the question, he’d have to quell his brute-force instinct to fight dirty and instead employ polish, tact, and charm—all the qualities he possessed zero of.

Fuck. This was going to be a shit show.

Still, One-Mile refused to give up. He’d known uphill battles his whole life. What was one more?

Through the front window, he spotted the soft doe eyes that had haunted him since last summer. Though Brea was talking to an elderly couple, the moment she saw him approach her porch, her amber eyes went wide with shock.

Determination gripped One-Mile and squeezed his chest. By damned, she was going to listen, too.

He wasn’t leaving without making her his.

As he mounted the first step toward her door, his cell phone rang. He would have ignored it if it hadn’t been for two critical facts: His job often entailed saving the world as people knew it, and this particular chime he only heard when one of the men he respected most in this fucked-up world needed him during the grimmest of emergencies.

Of all the lousy timing…

He yanked the device from his pocket. “Walker here. Colonel?”

Colonel Caleb Edgington was a retired, highly decorated military officer and a tough son of a bitch. One thing he wasn’t prone to was drama, so that single foreboding syllable told One-Mile that whatever had prompted this call was dire.

He didn’t bother with small talk, even though it had been months since they’d spoken, and he wondered how the man was enjoying both his fifties and his new wife, but they’d catch up later. Now, they had no time to waste.

“What can I do for you?” Since he owed Caleb a million times over, whatever the man needed One-Mile would make happen.

Caleb’s sons might be his bosses these days…but as far as One-Mile was concerned, the jury was still out on that trio. Speaking of which, why wasn’t Caleb calling those badasses?

One-Mile could only think of one answer. It was hardly comforting.

“Or should I just ask who I need to kill?”

A feminine gasp sent his gaze jerking to Brea, who now stood in the doorway, her rosy bow of a mouth gaping open in a perfect little O. She’d heard that. Goddamn it to hell. Yeah, she knew perfectly well what he was. But he’d managed to shock her repeatedly over the last six months.

“I’m not sure yet.” Caleb sounded cautious in his ear. “I’m going to text you an address. Can you meet me there in fifteen minutes?”

For months, he’d been anticipating this exact moment with Brea. “Any chance it can wait an hour?”

“No. Every moment is critical.”

Since Caleb would never say such things lightly, One-Mile didn’t see that he had an option. “On my way.”

He ended the call and pocketed the phone as he climbed onto the porch and gave Brea his full attention. He had so little time with her, but he’d damn sure get his point across before he went.

She stepped outside and shut the door behind her, swallowing nervously as she cast a furtive glance over her shoulder, through the big picture window. Was she hoping her father didn’t see them?

“Pierce.” Her whisper sounded closer to a hiss. “What are you doing here?”

He hated when anyone else used his given name, but Brea could call him whatever the hell she wanted as long as she let him in her life.

He peered down at her, considering how to answer. He’d had grand plans to lay his cards out on the table and do whatever he had to—talk, coax, hustle, schmooze—until she and her father both came around to his way of thinking. Now he only had time to cut to the chase. “You know what I want, pretty girl. I’m here for you. And when I come back, I won’t take no for an answer.”