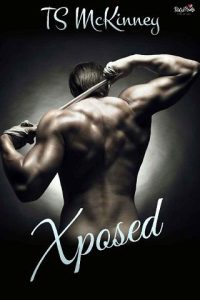 Indigo sat at his desk chair, closed his eyes, and for the hundredth time, imagined exactly what his new home looked like. Sure, he could believe what the decorator told him, knew what he felt with his fingers, but without being able to look with his own eyes, one simply didn’t know. Since his eyes no longer worked, he was totally fucked in the decorating and grooming departments. He knew he was clean—showered twice a day, kept himself manscaped as well as possible for a blind person, and got his hair cut when it started to feel too long. In his world, or at least his old world, longer hair led to curls.

He leaned his head back against the headrest of the office chair and stared at what he assumed was a pristine white ceiling. Again, the decorator had assured him. He wasn’t a pussy…even if he sounded like one in his own head…or out loud if he ever talked to anyone on a regular basis. Up until two years ago, he was ex Special Forces and a member of the most badass security team in the free-fucking-world. It had all disappeared, though. One wrong move. One second off. The tiniest delay or the partial second that he should have hesitated and didn’t. He’d gone over it in his mind a million times. Changed the scenario two million times. None of that mattered, though. He was still blind. Other than being paralyzed, he’d ended up the most helpless living person he knew. See, Indigo knew that idea wasn’t accurate, fair, or politically correct, but since his life consisted of him, his dog, and one huge fat mother-fucking lie, he figured he could be as politically incorrect as he wanted. In the end, he was only hurting himself and that made him kinda happy.

It made him feel.

He closed his eyes and tried to see if the darkness changed at all. As usual—nothing. After the initial blast, when he’d been recovering in the hospital, the doctors had held up hope that his vision might return over time. It hadn’t. He’d always heard that blind people had superior senses—improved hearing, smelling…all that bullshit. Maybe it had only been his fourth day of being blind, but he’d automatically known the doctors were lying, or at least offering the tiniest bit of hope where no hope actually existed. That was the last of his superior, super senses. He was nothing special as it turned out. Needless to say, it had been a tough transition. He’d hated everybody, especially himself.

Two years later and he was still blind as a bat. After the first year and a half, he’d learned enough about caring for himself that he’d ghosted all his friends. The pity in their voices was slowly starting to kill the little bit of life still in him, especially Clay—his huge crush…on a straight guy. Yep, the worst mistake a gay man could make. As it turned out, ghosting Special Forces, especially when one of the members of the team was badass at computer hacking, wasn’t nearly as simple as he’d hoped. He’d been quite proud of himself at first, even patting himself on the back, but then he’d been found—truth be known, he’d probably never been lost from them. So, however that stupid saying was on Friends, they didn’t know he knew that they didn’t know he knew…or what-the-fuck-ever. The bottom line was Indigo knew they were around and that they, especially Clay, had betrayed him in the worst possible way…and like a fool he continued to let it go on because he was desperate, needy, and pathetic. At first, that first night, it had started with Indigo pushing Clay, just to see how far he would go before he caved. Clay hadn’t caved. Indigo hadn’t either. It had been a game of chicken…one they both lost. Afterwards, Indigo had hated himself, but he’d hated Clay even more. Same feelings the second, third, fourth…twentieth time after the first night. Thankfully, his only friend in the world, Sky, chose that moment to interrupt the dark direction his mind was turning.

“I’m sorry, Sky-baby, is it time for your walk?” Indigo baby-talked to his service dog. Again, nobody could hear him, so it was perfectly safe to emasculate himself even more in the privacy of his own home. Using his hands as a guide, he found her harness hanging next to the door. You know…where it always was because he’d never fucking find it if he misplaced it. And it wasn’t as if he could ring a neighbor and ask for help. When he’d made his move to ghost everybody, he had intentionally chosen a shitty, unsafe neighborhood to live in just to make it one step harder for his team to try and find him. Hollister, the kid next door, was the only one he’d let into his private sanctuary and that was probably a mistake. Well, Hollister and undercover Clay.