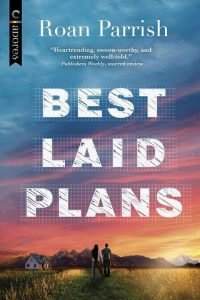 After sixteen hours of driving and a miracle that prevented his car from dying, Rye Janssen was exhausted and slap-happy, but hopeful.

Around hour three, his cat, Marmot, had realized she could squeeze between the headrest and Rye’s neck and bat at his hair as he drove. By hour nine, Rye had consumed so much gas station coffee he was practically vibrating and Marmot had exhausted herself and curled up on the dashboard, snoozing in the sun.

As the road spooled out behind him and before him, Rye felt like he could breathe for the first time in years. He used to love Seattle. As a child, the city had felt like a world of possibility. When had it become claustrophobic?

His car stereo had broken ages ago, so Rye hummed to himself. Then he sang, loud, belting words he hadn’t thought of in years, letting the wind rushing by his open windows snatch the sound away.

When Marmot crawled onto his lap and looked up at him with her alien eyes, he realized he was crying. Marmot licked at his chin and he smiled.

“Best decision I ever made, pulling you out of that oil can,” he told her fondly.

Rye only hoped the decision he was currently making turned out anywhere near as well.

When Rye had gotten the call three days before, informing him that he’d inherited a house from a grandfather he’d never met, Rye assumed it was some kind of scam. He hung up, irritated it hadn’t been someone calling about one of the many job applications he had submitted. But after several more hours of phone tag and internet research, eventually Rye believed it.

He had inherited a house in some town he’d never heard of in Wyoming, a state he wasn’t absolutely positive he could point to on a map.

In the end, the decision was surprisingly simple. Rye was broke. He’d been crashing with different groups of friends every week since he and his housemates had been evicted two months before. It had been his third eviction, and this time there were no more places to scrape together first, last, and security for.

Throw in the fact that he was pretty much out of cat-friendly couches when he wore out his welcome on this one, and suddenly a house of his own sounded pretty damn appealing. Maybe he didn’t know anyone there; maybe he had to google map it; but at least he’d have a roof over his head.

So Rye had packed his few belongings into his untrustworthy Beretta, grabbed Marmot, and hit the road as the sun set over the bay.

When he arrived at the address the lawyer had given him in Garnet Run, Wyoming, Rye thought he’d been punked. Hoped he had been, because if this was what he’d just left Seattle for, Rye was utterly screwed.

The house stood in a wind-blasted field surrounded on two sides by woods, with nothing around but a horror movie scarecrow clinging to its post and a pack of chipmunks that seemed intent on taking over the world. Were there tornadoes in Wyoming? Because it looked like one had hit the house.

Rye crept cautiously in the open front door, hoping the roof wasn’t about to cave in. Marmot sniffed delicately, sneezed, hissed at her own sneeze, then scampered off to explore.

The interior appeared to be held together by spiderwebs, dust, and a few rusty nails that looked like they’d originated in the Lincoln administration. The walls sagged, the ceiling sagged; the whole damn house looked like it was being pulled straight down to hell by some central sinkhole beneath it. To the right was a narrow staircase, presumably to the second floor, but Rye would be goddamned if he was setting one foot on that obvious death trap.

A doorway beyond that led into a small kitchen, and through that another door led outside, where a porch even saggier than the house drooped. From the back of the house, far away, Rye could see the peak of one solitary rooftop. Had he moved to some kind of ghost town?

He walked a little ways away (because, seriously, the house—god, his house—looked like it could collapse at any second) and sank into a crouch, hand clasped across his mouth to keep in the sound of his panicked breathing.