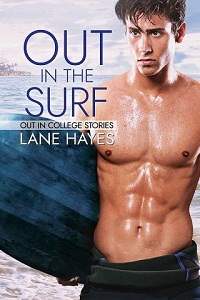 “As you start to walk on the way, the way appears.” —Rumi

Eight a.m. was way too early for this nonsense. Whose idea was it to transfer to the West Coast and learn how to surf?

It might have been helpful if someone had mentioned that this endeavor required waking up at the crack of dawn and squeezing my booty into a borrowed skintight wetsuit. Those little details could have been game changers. Too late now. Surf lessons were courtesy of my parents. I had to show up for lesson number one or figure out how to lie to my mom when she asked if the hobby I’d hoped might replace hockey was keeping me out of trouble in Lala Land.

I’d had more awkward morning-after conversations with guys whose names I didn’t know in the last sixty days than I’d had since, well…ever. It was time to get my act together and settle into a scholastically responsible routine. I could do this.

With classes starting at Long Beach State in a week, I didn’t want to be the guy who slept through my alarm and was late every other day. I knew from experience that it was damn easy to get stuck in bad habits. I’d given myself a long leash to have all the fun my heart desired this summer, but slipping into loser gear was not an option.

That was where surfing lessons came in. I’d always wanted to learn how, but Ann Arbor wasn’t exactly known for its surf scene. I’d grown up playing hockey like every other kid on my block. And loving it. But those days were over. I had a new life on a new coast at a new school. So why not try a new sport too? One that I could do with a friend who would make sure I got my sorry ass of bed before noon.

“Help me out, Luca.” Zoe lifted her ponytail out of the way and turned.

I zipped her up and requested she return the favor as we waited for the owner to pull a couple of boards off the rack. Jay…or maybe his name was Ray—was small and wiry with a shock of white hair and skin so tan it looked partially leathered. He’d instructed us to put our belongings in a locker at the surf shop, change into wetsuits, and head outside to meet some guy named…

“Who’s our instructor?” I asked.

The older man propped a medium-sized board against the stucco wall and tilted his scruffy chin. “Well, you two lucked out. Cal is gonna take care of you. And mind you, he’s the best there is.”

I squinted at the figure walking toward us on the sand. I couldn’t see much at that distance, but I could tell he was tall and fit with a swimmer’s lean physique under his wetsuit. And his longish dark-blond hair curled around his ears enticingly. There was something purposeful yet cocky in his stride. I didn’t know jack about this guy, but I could tell he wore confidence like a second skin. And let’s be real, confidence is sexy.

Zoe nudged my elbow. “Mmhmm. I’m suddenly very happy I let you talk me into this,” she hummed in a low voice.

I chuckled as Zoe’s smile lit her face. She was a petite Latina who did everything big. Her dark hair was super long, her brown eyes were huge, her lips were always painted red, and if she could have rocked her giant hoop earrings and a pair of stilettos on a surfboard, you bet your ass she’d have done it. The girl had a style all her own.