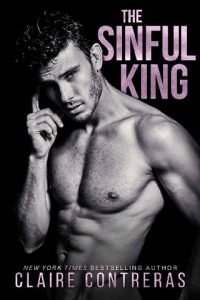 “You probably shouldn’t be here.”

I jumped slightly at the gruff voice behind me and turned to watch the man walk over until he was standing beside me on the balcony, overlooking the beach before us. Not that we could see anything in the dark, but the sound of the waves was enough. I tried to make out his face before I answered him, but couldn’t with the mask he had on. If I had to judge it based on what I could see, I’d say he was classically good-looking, with a strong jaw, straight nose, pouty lips, and thick dark hair that was brushed back.

“It’s the princes’ party.” I cleared my throat. “Everyone’s here.”

“Everyone’s inside, partaking in the debauchery. You’re out here, drinking water.” His lips twisted as he took in the glass water bottle in my hand.

“Bored of the debauchery?”

“Bored of all of it. The party, the people, the pretending, the masks.”

“So take off your mask.” I shrugged a shoulder. “I don’t think they’ll kick you out for that. Or you can just leave.”

“I’m here with a friend.” I sighed heavily and looked over my shoulder and spotted Etienne dancing with some woman. They looked like they were doing more than just dancing, so I looked away quickly. “We practice the whole no man left behind thing, so I have to wait until he’s finished.”

“Etienne.” The man beside me nodded once. “I believe I met him.”

“Where are you from?”

“That’s a complicated answer.” I looked up at him again. It was difficult to see what color his eyes were. They were definitely dark though.

“Okay. I was born here in Marbella. It’s my mother’s hometown. My father is French. They met in university. I grew up in the States—in Connecticut, where I went to school and stayed with my aunt and uncle—while my parents traveled back and forth between there, here, and France. My grandmother is dying, so my mother spends most of her time here, and my father works in Paris, so he’s over there.” I bit my lip when I finished talking, unsure if he’d been able to keep up with all of that or even cared to. I wasn’t even sure why I’d actually explained all of it at all. I guess because he asked and I was as bored as he said he was.

“Where do you live now?”

“I’ve been living here for the last two months, but I go back to the States tomorrow.”

“School. I was accepted into the University of North Carolina, so I’ll be there for four years, and then . . . I don’t know. I’m thinking I’ll settle in London.”

“I want to start an event-planning company. It’s my mother’s dream, and I really think we can do something great together. We’ll see though.” I smiled as I thought about it. “I’m studying Hospitality Management and landed a part-time position in event planning at a hotel near the school, so I’m hoping to learn as much as I can.”

“I didn’t realize you needed a degree to plan events.”

“My parents.” I shrugged. “They both went to college. It feels weird for me not to go after they spent all that money on boarding school.”

“It seems weird for you to spend more of their money going if you already know what you want to do and don’t need a degree to do it.”

“Starting up a business requires money, and time, and a lot of dedication, which I’d gladly give, except I have no money for it, and time and dedication are great, but you have to have money to back it up.” I shook my head. “What do you do?”

“I work for the government.”

He chuckled. “What’s wrong with the cabinet?”

“Well, I’ll admit the things I’ve heard are biased, being that my father works for a newspaper that’s extremely critical of the Crown and the way they built the cabinet. I mean, the king handpicks his subjects. It’s a bit . . . communistic.”

“Ah, your father is one of those.” His lips formed a small smile. “I bet he has a lot of strong opinions about the way things should be run.”

“He does. I mean, I guess everyone does, right?”

“It seems like the critics have more opinions than those in office. You’d think if they want something to change, really change, they’d run.”

He chuckled. He had a nice chuckle. Our eyes met again, and this time, I found myself standing a little closer to him. His smile turned serious after a moment of looking at me, and I felt my own expression mirror his. Suddenly, I was hyperaware of him—his height, his large hands resting beside mine, seemingly inching closer, the way he smelled, like delicious cologne and something else—and when he parted his lips slightly, the hint of tequila on his breath.