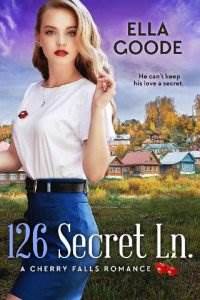 It's 6:35 on a Thursday, which means that Mark Toscati should be going to the Virgin Street Diner to order his standard double cheeseburger with mashed potatoes and extra gravy. The extra gravy is not for dipping. The gravy and the potatoes are for his dog Mavis. Mavis is one of those big poodle mixes. I don't blame Mark for treating his dog special. She's smarter than most people I've met. If I had a Mavis, I'd feed her smothered mashed potatoes too.

But Mark does not go toward the diner. Instead, his ten-year-old Toyota Camry backs out of his drive and heads toward Kissme Bay.

That's odd. A tingle flickers in my fingertips. Humans are creatures of habit, and if they have a routine, they are loath to deviate from that routine. They can't help it. If they do something other than their ordinary schedule, they're going to feel off all day. It's just the way that we are wired. It would take something unusual, something important to get Mark to ignore his dog and his own instincts.

I follow Mark’s car as it moves swiftly down Marriage Lane toward the water. As he approaches the beach, he takes a left at Sugar Road and heads down the coast. Abandoned coastlines are perfect places to dump bodies. Excitement crawls up my throat. It looks like Mark is alone, but he has a closed garage, which means someone could've gotten into his car without anyone noticing or he could have placed something in his car secretly. I wouldn't have pegged the forty-year-old accountant as being that clever or sneaky, but I have only been watching him for a couple of weeks.

Ahead of me, he pulls off the road and parks, leaving his car behind to head down toward the beach. To my disappointment, he does not drag a body bag out of the trunk, nor does he appear to be carrying anything in his hand. It’s a cold night—too chilly for a walk along the beach. The wind is picking up, and even from a distance, I can see Mark’s dark windbreaker flapping in the breeze. He’s not even dressed for the weather.

I debate whether to follow him or investigate the car. There’s almost no obstructions along this stretch of the coastline, so he’d easily see me, whereas the car is parked slightly behind a small dune. The car it is then.

Mark’s vehicle is a mess. There are fast food bags and empty wrappers strewn all over the passenger seat. Clothes, shoes, piles of papers fill the back. I hope those are no one’s taxes.

There could be a body here and no one would know because of the piles of garbage. Actually, that's not a bad idea. I pull the notebook out of my pocket and make a note. The axle would be a problem because of the hump in the back. The body would curve over it and make a noticeable lump. Do electric cars have that axle? I'll need to look into that. The amount of trash in the rear doesn’t seem to be substantial enough to cover a body.

"What do you think you're doing?"

I look up to see a woman, a very beautiful, very curvy woman, glowering at me. A camera hangs around her neck. Golden brown hair is piled on top of her head with stray strands blowing across her face. She's dressed in jeans cuffed at the ankle and a tweedy oversized blazer tossed over a cream-colored T-shirt. I haven’t been living in Cherry Falls long enough to recognize everyone despite it being a small town, but I know if I’d seen this woman before I’d never forget her.

The one thing I’ve never liked about people is their nosiness, and yes, it’s ironic of me to say this while I’m inspecting Toscati’s car, but I’m doing research, and this woman is ... I don’t know what she’s doing. Small towns are great for hiding out, but the townspeople are always up in your business if you allow it. From my past experience, the best thing I can do is just ignore them. I’ll get a bad reputation for being a stuck-up asshole, but the sooner people figure out that I’m not going to answer their questions—no matter how inconsequential, like “how was your day and what’s the weather like?”—the sooner they’ll all leave me alone. I go back to inspecting Mark’s backseat.

“Are you seriously going to ignore me?”

Her voice is sexy. It’s got a little purr to it that would be nice to listen to right before you drift off to sleep. I wonder what it would take for her to record a special message for me that I could replay on my phone. Something like, “Sleep well, baby, because tomorrow you’re going to write all the words.” That would be even better than sex at this point since I’ve been blocked for over a year.