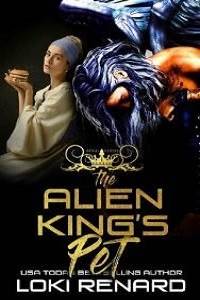 “Enough of your insolence!”

An alien hand gripped her by the throat as an equally alien appendage prepared to slide inside the tight channel she had guarded in place of true virtue all her life. A girl could be many things, but as long as she had that little piece of skin intact inside her, she could claim virginity, and therefore purity, and therefore she was a good girl, even if everything else she did was very, very bad.

Did virginity mean anything to an alien king, besides something to be claimed and destroyed as quickly as possible? Was it worth even trying to beg to preserve her purity? Or was innocence something that could not exist in the same space as this alien tyrant?

She felt the collar tighten, making her breath catch in her throat as she prepared for the inevitable. Ultimately vulnerable, she stared into the dark abyss of the alien king’s gaze. There was nothing human about this massive, winged creature who had claimed her.

He’d picked her out of the crowd. He could have chosen anyone on their way to work. But he’d chosen her. Fate? Bad luck? She didn’t know what to blame, besides the alien king himself. He was a beastly brute who had turned her rear red for disobedience, and was now intent on making every inch of her body his.

That. Ass. That had started it all.

When he’d first seen it, it was clad in a tight, stretchy polyester-spandex blend, two earth materials which did absolutely sinful things to a woman’s hindquarters. Across a street, down a block, in the midst of a throng of humans all walking and shouting and bumping into one another, those round globes called to him. They belonged to a young human woman who seemed unaware of the intergalactic impact her posterior was going to have on her life.

Dominax had not belonged on that planet, unimaginatively called Earth by its inhabitants on account of being made in large part, of earth. He had been drawn there by animal lust, and amply rewarded simply by the sight of the female destined to be his.

As alien royalty on a distant world, out of space and out of time, he had been entranced by so many things on the planet of the humans. But nothing had drawn his attention, captured his imagination, and sparked his desire the way that portion of anatomy did.

Now he had her beneath him, writhing in a way only human hips could. Every time he slapped her skin, it colored beautifully, and her hips performed a gyration which invited further torment. The beautiful globes of her cheeks were crimson red with the consequences of her actions and the heat of his desire.

The human was beautiful, but she was also mouthy and exceptionally disobedient. Dominax did not like to be defied, and certainly not disobeyed, but there could be no denying that the aftermath of a well-deserved punishment was a sight to behold. The way her skin shifted in hue and texture was of great interest to the king, who had seen the same patch of sweet flesh turn from smooth pale ivory to bright red via subsequent and repeated application of his palm.

“Ow!” She let out a gasp of complaint as he laid his hand over her rear again in a sharp slap which brought a fresh flush of color to her cheeks.

“You could have avoided this by choosing obedience,” he informed his captive human.

“I could have avoided this by avoiding you,” she snarked back.

There had never been any avoiding him. Dominax knew this wild little human belonged to him as surely as he knew anything. She was on his planet now. She was in his control. And soon she would spread those pretty thighs for him and beg him to plunge inside her for the final and ultimate conquest of body and will.

An undetermined number of hours earlier…

Katie was not in the mood to go to work.

She was not in the mood for burgers, grease, and customers who yelled over nothing. But she had to go to work, because nobody else was going to pay her rent, were they?

There was a guy in the corner of the subway sniffing repeatedly to himself, wiping his nose on his hand, and then touching the pole and seat. It made her shudder. She sent up a silent prayer that they wouldn’t get held up in one of the frequent stoppages which had claimed months of her life in the short time she’d been living in the city.

The subway came to a halt, doors opening to release a slew of humanity out, before carrying on with a fresh batch. Katie pushed through the crowd and the crowd pushed back, just a big wall of people with scrunched up faces looking perpetually pissed off.