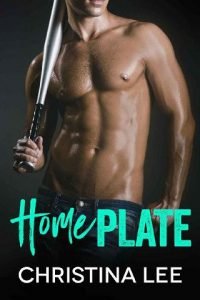 I set down the dumbbell and ran a wrist across my sweaty forehead. The university weight room was pretty empty this time of morning, with most students off to classes. And though I recognized a couple of guys from other Easton U sports teams, I preferred to work out by myself. I enjoyed pumping iron when there were fewer distractions. Coach Crawford encouraged us to keep in shape and log in our workouts during baseball season, but our schedule was tight as it was, with at least three games a week and one practice. So having plenty of room to myself on the mats was just the sort of atmosphere I welcomed.

My neck prickled with awareness, and that was when I noticed Mason Maclain clocking in time with his roommates, Hollister and Donovan.

“Yo, Girard,” Hollister called out. Donovan waved, but Maclain barely made eye contact. It was always that way between Maclain and me—we only talked when necessary, and kept it to a minimum even when we were part of a larger group, which was pretty much always since we were all players on the Easton U Pirates.

I hoped they stayed on the other side of the room near the leg machines so I didn’t have to interact very much, and as they settled in, it looked like that was exactly their plan. I had a class in a couple hours and needed this workout to relieve some stress, and not only from the guy across the way.

But damned if Maclain didn’t make all my nerve endings buzz awake every time we were in the same room—and not always in a good way. Maclain was the most frustrating person on the planet, so of course he had to be the very person I had good chemistry with on the field. Fuck my life.

I watched briefly as Maclain slid behind one of the machines, the muscles in his legs bulging as they met resistance. When his arrogant gaze connected with mine across the row of treadmills, a little shiver rolled through me, one I couldn’t easily explain. I was a straight guy with a girlfriend, so it couldn’t possibly be attraction—at least I didn’t think so. I’d never thought that way about another guy in my entire life.

I averted my eyes before he noticed how he affected me, but not before giving him a quick once-over. Maclain wasn’t as ripped as me, most pitchers weren’t. But there was something about the guy that had always drawn my attention.

Maybe it was the fact that his prickly exterior didn’t match what I saw buried deep in his eyes—a barely restrained loneliness and bald need. For what, I wasn’t certain, because he’d never admit it in a million years. Except, the entire team knew by now that his dad was a dick who promised to attend his games but never showed, so there was that. And I felt bad for him, especially since he seemed to be filled with such hope at the beginning of each inning, only to be leveled by the bitter disappointment he had trouble disguising throughout the game. It seeped into his moods and interactions, and if he recognized that some people shied away from him because of it, he didn’t seem to care.

Still, maybe that was why I always gave him the benefit of the doubt. I also figured if I could somehow get to know him better, it might help us click on the field more, given he was our star pitcher and I was the Pirates’ catcher. Plus, I was damned curious what else made the guy tick. He sure didn’t make that easy…

Though I’d confess, the few times I’d been privy to one of his genuine smiles, it felt like a swath of direct, warm sunlight that always improved the mood. Probably because he didn’t give them freely or often, and Maclain in a decent headspace led to a good pitching game. That definitely had to be the reason.

My girlfriend barely tolerated him and even complained that I let Maclain get under my skin. For some reason, I got under his too—except for the times we’d totally meshed on the field, resulting in a big win. Then it felt amazing.

I turned my back and got lost in working out for the next hour, and by the time I was ready to hit the locker room, the weight room was empty. My teammates were no doubt already in class, and I was glad to have this time to myself before heading to my own.

My feet faltered as I passed by the shower area and spotted Maclain standing directly under one of the spigots. Rivulets of water rolled down the smooth skin of his back to his perfectly shaped ass. I’d seen it plenty of times in the Pirates’ clubhouse. In fact, all of us had seen each other’s junk as we changed and showered after games. But staring was a different thing altogether. And being here alone, without fear of repercussions, I looked my fill at his rock-hard thighs and calves, wondering if that made me a creeper or an admirer.