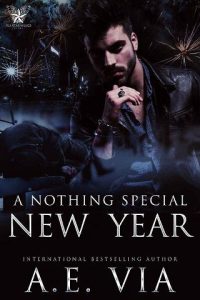 “You guys be sure to stay alert out there tonight. I don’t want another young life lost from this drug. We have to protect this city, or it’s going to go down like the damn Titanic! Especially if this next shipment of Halucanax makes it onto the streets.” Their precinct captain pounded his thick fist on the podium stand as he eyed each of them with a seriousness they only saw when he was under pressure from the chief. “The new year is rapidly approaching, and so far we have no leads on the large amount of hallucinogens that’s expected to arrive soon and ravage our city.”

Mason took a deep breath, wishing that all he had to worry about this new year was making a few resolutions on eating out less and investing more time in his personal life. Instead, he had to worry about a new tidal wave of drug dealers flooding the neighborhoods, pushing a new, highly lethal drug. Mason elbowed his partner, Clark, and muttered near his shoulder. “So much for an easy week.”

“Easy week,” Clark grumbled. The slight twitching of his thick mustache was the only way Mason knew his good friend’s lips were moving. “What the fuck is that?”

Mason snorted, then turned his attention toward his own lieutenant, who was standing along the wall of the huge bullpen with several other department heads. He tilted his chin at something over Mason’s shoulder, triggering him to turn around. He swallowed thickly when he saw the city of Atlanta’s narcotics task force gearing up in tactical equipment behind the floor-to-ceiling glass that separated their department from the rest of the bullpen. The task force was headed up by badass lieutenants, God and Day, two officers who were not only revered and respected throughout the police force but also notoriously feared on the streets. Sometimes Mason wondered what it would feel like to be a part of that kind of brotherhood, but he never dwelled on it long because he loved working the beat with his partner. So instead, he ignored the activity buzzing behind him and focused his attention on his own department’s duties.

“Now, you’ve all received the task force’s memo on what they want you to look for out there over the next couple weeks. There’s going to be increases in dealer activity and surges in the ERs. Bring ’em in like they asked. Be diligent, but most of all be safe.” The captain finished, then turned and walked away without bothering to ask if they had any questions.

It didn’t matter if they did. He wasn’t the man to answer them. He and Clark got up and walked over to their desks that were butted up against each other on the side of the bullpen closest to the task force department. It was almost seven, time for them to get on their beat, but he needed a couple of minutes to complete his vacation request.

“Oh hell no. Don’t you sit down at that computer, Mason.” His partner pointed at Mason’s ass right before he plopped it down in his chair. “You’re gonna make us late, man, and you know I wanted to stop by Erlene’s for a cruller.”

“It’s just my vacation request. I’m sure it’ll be a piece of cake… or cruller.” Mason chuckled as he opened up their interdepartmental application. It was pretty much the running joke of the precinct how technically challenged he was. Something as simple as creating a new file folder for witness notes could cause Mason’s entire system to go haywire, or so he claimed. He was sure his computer was doing shit on its own and making him look like a fool.

“When are you taking off on me again?” Clark asked, propping one side of his hip on the corner of his desk.

“I’m only using a few days of my vacation next month, not all of it,” Mason said nonchalantly, though his pulse was already quickening. He was going to a New Year’s singles meet retreat in Mars Hill, North Carolina, that he’d had booked for months. A four-day weekend of snow, skiing, and plenty of single men. Next year was going to be his fucking year. He was going to have a hot social life to go with his amazing job.

“What’s going on that weekend? You going to see your folks?” Clark asked, then started to groan when Mason began repeatedly hitting his Esc key.

“Damnit,” Mason hissed, cutting his eyes to his partner, then back to his screen. “Shit, shit, shit. Tab over twice, select the dates I want… okay, then… submit.” Mason clicked the green Submit, but another error popped up, indicating his request could not be sent. “I know I’m doing this right.”

Ignoring his best friend, Mason shook his head in confusion, unable to see what it was he was screwing up. He had to get his paperwork in early since he was sure there’d be plenty of married officers trying to get in their forms for Valentine’s Day weekend too. He closed and reopened the application again, but the damn request still stalled. “Fuck,” Mason barked, tossing his mouse to the floor. It was his seventh one this month.