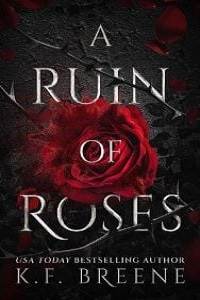 A low growl rumbled through the Forbidden Wood. My heart jumped into my throat.

I darted behind the nearest tree and flattened my back against the rough bark. My tweed bag hung across my torso, filled with the precious cargo I’d stolen from the everlass field. If the beast found me with this—if it found me in the Forbidden Wood at all—I was done for. It would kill me as it had done countless others, regardless of the fact I was only fourteen.

A tree branch cracked. What sounded like a large foot crunched brittle grass. Another touched down, the creature slowing. It either sensed someone close or had caught my scent.

I sucked in a breath and squeezed my eyes shut, my hands shaking. Loud snuffling filled the silence. The beast sniffing out its prey.

My parents didn’t even know I’d come. Nana had fallen ill, the effects of the curse that had damned our kingdom. Everyone said there was no cure. But I’d found a way. I could slow the effects, at least. I needed the everlass plant, though, and we hardly had any. I was still learning how to properly grow it. No one else in the village could do much with it at all. Something about it spoke to me, though. I would figure it out eventually, I knew I could—but right now, I was out of time.

My lungs burned. I was afraid to breathe.

More grass crunched under the beast’s enormous feet. It was moving in my direction!

A whimper escaped my lips. I slapped a hand over my mouth, but it was too late. The footsteps ceased. It had heard.

The darkness lay thick around me. Silence.

The beast roared, making me jump half out of my skin. Fear doused me in adrenaline, and then I was running. Sprinting as fast as I could go. I crashed through the brush. Rounded a tree.

Its footsteps gained. It was coming so fast! How could I possibly escape?

Loud grunts sounded way above me, its breath puffing out as it moved. If its head was that high off the ground, it was much bigger than the rumors had said.

A wall of brush waited up ahead. Two trees crossed within it, creating a narrow opening between the thorns. I took a chance and dashed between them.

Sliding sounded behind me, and I glanced back to see two enormous feet ending in long, sharp claws churn the dirt. They stopped just before the opening.

Crying now, unable to help it, I kept going, getting onto my hands and knees and crawling. Dense foliage covered me overhead. Thorns ripped at my flesh. I continued to crawl, now on elbows and knees.

Breath blew out behind me. It was tracking my scent.

The dark hollow up ahead announced the end of this natural tunnel. Blood trickled down my cheek from where a thorn had ripped through. The bag of everlass crunched under my body. I knew that would be bad for the elixir, but I didn’t have much choice.

I needed to get it out of here. Nana’s life depended on it. Her cough was really bad, and her breathing was shallow. She needed help.

Summoning my courage, I pushed up to a crouch in the darkness, looking out at the starless night. Trees rose all around, and the ground was a tangle of weeds and brambles. Nothing moved. Could the beast have moved on?

In my heart of hearts, I knew the answer, but my fear was out of control.

I thought about staying put, but it could wait me out. Or come in after me. It had an armored face, everyone said. A few vines and thorns wouldn’t trouble it.

I sprinted forward, sobs choking me.

Its roar followed me, ever closer. My breathing came in harried, haggard gasps. I pumped at the air with my fists and rounded a tree. The edge of the wood was just up ahead. Although other horrors could cross that line, the beast, the guardian of the Forbidden Wood, could not.

Lights in the village jiggled in the wet haze of my vision. Candles in windows. Fires in yards. They awaited me. They were right up ahead!

The roar rattled my bones, much too close.

The end was near.

Glowing golden eyes tore me out of sleep. I sucked in a terrified breath and sat up in a rush. My hair was plastered to my face with sweat. My shirt clung to my back. A nightmare.

No, worse than a nightmare. A memory.

I still remembered busting through that tree line at fourteen and catching my foot on a rock. Falling and skidding on my face. When I’d stopped rolling, I lay sprawled out, facing the wood.