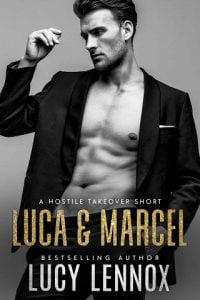 “Listen, I hate that you broke your leg, Jillian. Of course I do. But you have two hundred and five perfectly functional bones,” I reminded her reasonably. “Is this one little femur really a reason to cancel your trip to Vegas with your beloved boss?”

Jillian’s million-degree glare lost a little of its fire under the haze of IV narcotics. “Bite me… boss.”

I sighed and shifted in the uncomfortable hospital chair beside her bed. “You know what I mean. My cousin Curtis is good at talking me into things, and without you there as my personal assistant to back up my arguments with quick access to the data, I’m likely to sign away my entire fortune by accident.”

“Maybe you could stand to lose some of that money,” she muttered. “It’s not like you ever spend it.”

She was right. I was a workaholic and rarely took time to spend my money on myself. That wasn’t the point. The point was, I was prone to letting family talk me out of my money for stupid reasons and poor investment opportunities. My best defense was my no-nonsense PA, who was experienced at gently leading me away from making stupid decisions on the fly.

“I at least need a second pair of hands. Someone to look stuff up on that tablet you’re always carrying around. Say official-sounding things like, ‘We’ll look into it’ and ‘Give us some time to crunch the numbers.’ That kind of thing. This resort opportunity is compelling. I don’t want to miss out on a chance to get in at the ground level because I was too scared to assess it without my PA.”

“You can hire a temp,” she said. “Personal assistant temps are a dime a dozen, and, bonus, they usually come pre-bitchy-fied.”

“Are you crazy? A temp? Me?” I realized I was clutching the front of my shirt and carefully lowered my hand to my lap. “I need a miracle worker. There’s no temp alive who could do your job.”

A faint smile touched Jillian’s lips. “Thanks, boss. You flatter me.”

I really wasn’t, though, and that was the problem. “Maybe we could rent a wheelchair for you…” I thought through various scenarios. “We’re taking the private jet, so that part would be fine… and then… well, I don’t know how accommodating the Bellagio is for wheelchair users, but I figure it has to have accessible rooms, right? Please, Jill? I’ll buy you a pony. Or a Ferrari. Or both.”

Jillian’s husband finally spoke up from where he’d no doubt been biting his tongue into pieces. “She’s having surgery, Luca. Jesus. She’s not going to Vegas with you on your work trip.”

I glanced at him. There were probably good doctors in Vegas for this kind of thing. “But she could—”

“Nope.” He wasn’t budging. “Find someone else.”

“We’ve been planning this project assessment for months,” I argued before turning back to Jillian. “You probably already have everything ready to go. How do I find someone who will know what to do with the information? I know! What if we put them on comms with you and you can talk them through it from here? Like… I can get you a really good headset, and you can—”

Jillian groaned and leaned her head farther back on the pillows. “See, Murph? I told you.”

I glanced between her and her husband. “Told you what?”

Murphy kept his eyes down on his phone, where he was playing some kind of candy-crunching game that made annoying noises. “That you’re way too focused on work and probably need to get laid.”

“I need to get paid?” That didn’t make any sense at all. Unless he was talking about this resort opportunity. “I haven’t decided if I’m going to invest yet.”

“He’s so far from getting laid, he doesn’t even know what the word means anymore,” Jillian murmured, shaking her head. “So sad.”

Murphy huffed out a laugh. “You were right, babe. The man can barely say it.”

“Luca used to have me schedule in two hours every other Friday night for ‘personal time,’ but it’s been at least six months since anyone got personal with his… time,” Jillian said. “No offense, boss, but it’s starting to show.”

“No offense? Oh, I take offense. How could I possibly not be offended? And I don’t need you to worry about my sex life. For your information, I had a very memorable and satisfying encounter as recently as…” I racked my brain to think of the last time I had sex, but my memory failed me. Huh. “Never mind when. But it was wonderful.”

The truth was, she wasn’t wrong. But I wasn’t exactly a fan of casual sex. I wanted a husband, not a fling. Now that I was over forty, I was tired of physical connections without emotional intimacy. And trying to get from a first date to marriage seemed impossible these days.