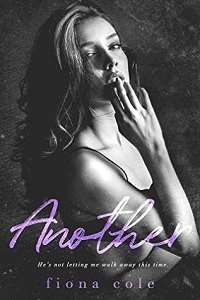 I never used to spend my weekends in the office. Hell, not too long ago, I was fucking two men.

Now, I was scrambling to shut down my computer on a Saturday to go on a blind date my four aunts had arranged as a Christmas gift.

“It will do you some good.” Aunt Violet waved away my concern.

“Is this sex?” my dad yelled. “Did you get my daughter sex?”

“Stop being such a prude, David,” Aunt Vera chimed in.

“Our girl has been down and smiling less than usual,” Aunt Vivian defended. “It will be good for her to have some adventure to take her mind off that dick that abandoned her.”

Aunt Virginia, the quietest, but by no means the calmest, just smirked, letting me know she was the mastermind behind all of it.

I’d put off their gift, but they’d hovered over me for a week until I booked it. They’d promised to ask for all the details once it was over to make sure I went. They’d gushed over the possibilities and finished off more than a couple bottles of wine as I filled out the form.

“Request a big dick in the preference box,” Aunt Vivian had demanded. “No harm in asking.”

All I could hope for was someone hot and not a creeper who wanted me to put the lotion on the skin. Honestly, I just wanted to get it over with, so I could get back to working on my projects—the only thing that sparked my interest these days.

Maybe my doubts would be proven wrong, and I’d actually enjoy myself. Maybe a ridiculously hot man would be waiting to sweep me off my feet and ignite the fire that had almost been extinguished six months ago. Someone to make me have somewhere better to be than the office on a weekend.

Shutting my car off, I sat outside the building for a few more minutes before heading in. I fluffed my hair that had been pulled up in a bun earlier this morning, practiced my smile that had grown rusty, and took one last cleansing breath, trying to go in with an open mind.

“Hello, welcome to Queen City Photography,” a smiling woman greeted from behind her desk. “What can I do for you today?”

She dropped her gaze to her computer and typed a few things in. “Ah, yes. The blind date session. Your match is already here. If you want to head through those doors, he’s in the waiting room on the other side. Make yourself comfortable, and Sarah, the photographer, will be in to talk with you in a bit.”

I turned, facing the door like a firing squad was on the other side. When was the last time I’d dated? Six years ago? I’d been with Jake, my fiancé, for so long, it all of a sudden hit me that I didn’t remember what dating felt like. Even before Jake, I’d been in college and hadn’t really dated anyone. It was just parties and fooling around.

What if I sucked? What if I was the worst at dating? What if this was the worst hour of my life and I was scarred from the experience? What if I never dated again. and died surrounded by all the cats I’d eventually buy so that I wouldn’t have to be alone?

I was being ridiculous—a coward. My eyes slid closed, and I breathed as deep as possible, stretching my lungs, forcing them to push past the band of panic that had been squeezing them. I was Carina Russo, heir to Wellington and Russo, marketing queen, and a powerful woman. I didn’t fail. I pushed on and succeeded.

You failed pretty epically at your engagement, a voice reminded me, faltering my steps.

With my hand on the knob, I reminded myself one more time. I was Carina fucking Russo. Whoever was on the other side of that door was about to have their socks knocked off. Like an engine sputtering to life, my excitement began, a coy smile forming on my lips.

A hallway greeted me on the other side of the door, and I pulled my shoulders back, making my way to the opening a few feet down. My heels clicked with authority, and the first thrill shot through me when I rounded the corner to find a man filling up an entire chair. His legs were spread wide, elbows on his knees as he looked down at his phone. I couldn’t see his face, but I could see the dark head of hair attached to ridiculously broad shoulders encased in a gray sweater. I could see his long fingers moving over his screen, his hands elegant but manly.