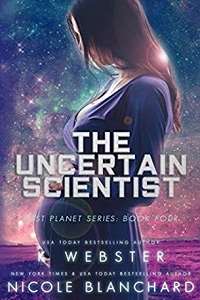 Everyone is talking all at once and giving me a rekking nog-ache. I would ask Avrell for some ghan-dust tablets, but he’s in a heated discussion with Calix. Both are growling and baring their fangs, seconds from ripping into each other. Calix has his reasons for not wanting to wake the remaining females, which I completely understand, but we also have Willow, Molly’s long lost daughter, to think about.

They may be the key to unlocking everything.

“Enough,” Breccan growls, effectively silencing all morts and the two alien females in the room. Even little Sokko, Breccan and Aria’s newborn mortling, grows quiet. The only sound he makes is suckling on his mother’s nipple. “I’ve heard your argument, Calix, and your worry is valid. Emery nearly lost her life when she was pulled from the cryotube.” Aria, Breccan’s mate and the leader of the females, frowns at the reminder.

Calix wraps a protective arm around his mate. She’s come a long way since then when Aria foolishly yanked her out of cryosleep before she was ready. However, Emery came with health issues. It wasn’t all Aria’s fault. I think he fails to remember that part.

“But it must be done. We cannot keep those two alien humans the way they are forever. We morts are just, good, and kind. We are not Kevins, which is why we won’t keep them caged and asleep any longer.” He frowns and gives Avrell a nod. “Check their vitals and then wake them. Emery and Calix will assist. Their discovery with the toxica agents could be useful if these aliens also have health issues.” The three of them leave without further argument.

Then, he points to me. “Sayer, I want you to continue attempting to reach Willow. I’m sure Molly will want to assist, as will Draven. It’s imperative you make contact with her.”

Of course I will. As our faction’s linguistics specialist, communication and language is my job. If there’s a way to speak to her, I’ll find it. “On it,” I affirm. “Right, Uvie?” I tug my hair out of its knot and it cascades down my front. With a quick twist, I affix it to the top of my head again—like Aria taught me—which is purposeful for keeping it out of my way while I work.

“The Mayvina is purring like a baby sabrevipe, Brec,” Theron says, bouncing with his usual energy. “You’ve been wanting Hadrian to learn to pilot and we should patrol from the skies. This knocks two items off our list.”

Breccan grumbles but gives a nod that has Hadrian flinging up his rogstud horns and hooting with excitement.

Jareth catches my stare from across the table and smirks. He’s been fiddling with his piece of metal for weeks now. A piece that has Draven practically running at the mere sight of it. I lift my brow at him as though to ask, What are you going to do with that thing?

He rolls it across the table to me and I catch it in the palm of my hand just as it rolls off the table. I shake my head at him. Rekk no. I know what this ring is for and that’s his thing, not mine. My cock is too nice to willingly run a thick metal hoop through the tip of it.

“Jareth and Oz,” Breccan says, causing Jareth to straighten to attention. “Help Aria make sure the sub-faction is ready for our new aliens. See to it that my mate has what she needs to welcome them properly.”

He shouts out more orders to the other morts, and soon, we’re off and on our missions. Jareth bumps his shoulder to mine as we walk down the corridor, grabbing my attention.

“You think the last two females will know more than Molly and the other awoken aliens?” he asks, his brows furrowing together. His choppy black hair is wrecked today and I have the urge to help smooth it out some.

I shrug and let out a sigh. “Not sure. Each alien has known more than the last. If there’s any information they can offer, we could rekking use it. We have to find Willow.”

Jareth scowls. “So Breccan can force one of us to mate with her too?”

Screeching to a halt, I poke him in the chest, but the giant mort doesn’t move. “He won’t make anyone do anything they don’t want to do. There are plenty of other morts around here desperate for a chance to mate with one of the alien females.”

He seems to calm with my reassurance.

“You never gave me my ring back,” he says, his lips lifting up on one side.

I pat my pockets and feign confusion. “Must have lost it.”

“I could pierce you,” he offers, his black eyes gleaming wickedly.

“You could rekking try,” I growl, giving him a shove.