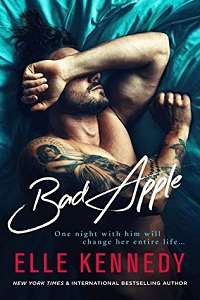 “Wipe that look off your face, Mags. You’ll scare the customers.”

I shove a wayward strand of hair off my forehead and glance over at my coworker. “What look?”

“The I’m-having-sex-in-an-hour-so-don’t-hold-me-up look.” With a cheerful smile, Trisha opens the icebox under the bar counter and dumps a scoopful of ice cubes into the glass pitcher she’s holding.

“Damn, and I thought my poker face was solid,” I reply with a grin.

“Who’s Tony?” Matthew, the cute, blond bartender, comes up behind us, curiosity etched into his chiseled features.

I shoot Trisha a glare, the kind that says one word and I’ll kill you. My sex life doesn’t need to be common knowledge among my coworkers. It’s already bad enough that Trisha knows about it, but she got me drunk one night and pried the details out of me.

To Matthew, I say, “No one. Trisha’s just screwing around.”

“Whatever.” He shrugs and heads for the other end of the bar.

“What part of ‘don’t tell anyone’ didn’t you understand, Trish?” I ask irritably.

The brunette gives a shrug of her own. “I don’t see what the big deal is. I mean, who doesn’t have a Tony in their life? Casual sex is more common than relationships these days.” She grins. “Though most people usually have it more than twice a year.”

I ignore the mocking remark. Trisha loves teasing me about the arrangement I have with Tony, but I suspect she doesn’t fully understand just how difficult it is for me to have a normal love life.

Free time doesn’t exist in my life. I spend my afternoons volunteering at a youth center and my nights serving drinks at The Olive Martini. My only two nights off are reserved for my college classes. How am I supposed to find a man who could fit into—or accept—my hectic schedule? All the guys I dated in the past got tired of seeing me only once a month.

I’ve been dumped a lot.

Not that I’m devastated. I mean, do I even want to be with a man who can’t respect dedication and a solid work ethic? I grew up dirt poor. I struggled to make ends meet all my life, scrimped and saved until I was finally able to pay for college. In a few short months, I’m going to have a degree in social work, leave the Olive, and hopefully get a permanent—paying—position at a children’s welfare agency.

So, really, I don’t need a boyfriend right now. Once I finish school, sure, maybe I’ll start seriously dating again. But for now, I’m perfectly happy having someone like Tony Burke in my life.

Tony is a travel writer who spends eleven and a half months out of the year roaming exotic places and writing about them. He comes back to New York two or three times a year, and I met him on one of his rare visits home when he stopped in for a drink at the Olive. We instantly hit it off. Wound up in bed the night we’d met, and our trysts are now the highlights of my year.

Tony flies into town, he calls me, we have sex. Then we both return to our busy lives, sexually sated and emotionally content, with no plans to see each other again—until the next time Tony pops up in the city.

The last time I saw him was over the holidays, and since it’s already May, I was expecting him to call any day now. Like clockwork, he had. Just three hours ago, with his hotel room number and the promise of some hot, stress-busting sex.

“Make fun of me all you want, Trish, but we both know you’re jealous,” I say good-naturedly.

“Aw, be nice. Lou kisses the ground you walk on.”

“Yeah, when he’s not watching football. Do yourself a favor, Mags. Never date a man who’d rather watch big sweaty goons chase a ball around a field than talk to his girlfriend.”

I laugh. Truthfully, I’ve always thought the leggy brunette could do a lot better than Lou Gertz, the high school football coach slash couch potato. But whether Trisha just has bad taste in men, or Lou’s a reflection of the kind of guys swimming around in the singles pool, my friend’s love life only reaffirms my belief that relationships are too much of a hassle.

I shift my gaze and notice my pot-bellied customer waving at me from across the room. “My biggest fan awaits,” I say dryly. “And by the way, he heard you snickering when he commented on my waitressing skills.”

Trisha snorts. “He called you a ballerina of the bar. He was asking for a snicker.”