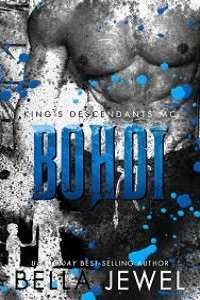 You know the ones.

The empty, soulless fucking eyes of a person who has nothing left inside. Nothing but a bottomless pit of insanity and desperation. Their eyes lose the sparkle, the very thing that makes them who they are. In their place, you’ll find nothing more than bitterness.

That’s what I see when I look at her.

The woman standing in front of me, waving her hands around in the dead of the night, screaming at me. She’s desperate, far gone off the edge of insanity. She’s broken and pathetic. Unfixable. Now she wants to take me down with her.

The problem with that is I probably wouldn’t mind.

If I too could escape the tight grasps of my life, I’d be forever free.

You see, I have the same empty eyes.

“You’re staring straight though me, Bohdi. You’re acting like I don’t exist. Will you look at me?”

The screeching voice of my sister-in-law, Sherry, rips through the still night and pierces right into my soul.

“I’m not sure what you want me to say, Sherry. You called me out here in the dead of the night to feed me the same story you’ve been giving me for the last year. I don’t believe it. There is no proof of it. I have little time to be around such lies.”

“I have proof!” she wails, throwing her hands up. “Your son doesn’t belong to you, and I have proof.”

“Where?” I say, crossing my arms, trying to calm my racing heart. “Where is this proof?”

“It’s in my car. I did a secret DNA test. I was right. They’ve been having an affair, your wife and my husband, and the son you think is yours ... isn’t.”

She moves to her car, and I stare over the edge of the cliff. We’re at a local lookout; the sheer cliff looks over a raging waterfall that connects to some local rapids people often go rafting on. It’s infamous in the area, and people come from far and wide to come to this lookout, staring down at the waterfall as it hammers over some of the deadliest rapids you’ve ever seen.

I personally have no interest in throwing myself anywhere near water that heavy.

Sherry returns a minute later and hands me a piece of paper. I step in front of her car, which has its headlights on, so I can read the writing. She has called me out here at midnight, after calling so many times I had no choice but to come. She’s been nothing but a burden in my life since I met and married my wife, Isla. She’s the disappointment of the family, forever causing drama and bringing chaos into their worlds.

So, it’s safe to say, I had little interest in believing her when she told me Isla and her husband, Daniel, were having an affair and that my son wasn’t mine.

Considering he looks a great deal like me, I find that hard to believe.

I stare at the paper, with my son’s name beside Daniel’s. I look at the writing and then the percentage score. My heart plummets into my stomach as the number 99.99999998% stares back at me. Sherry was right. My son doesn’t belong to me. Instead, he belongs to my friend and brother-in-law, Daniel.

Sherry cries this over and over again, her voice shrill.

Hell, she’s a fucking wreck. She’s crying and sobbing and pacing around. She isn’t handling this information well at all.

Can’t say I blame her.

Because of Isla, I’ve changed my entire world. I have given her absolutely everything there is to give.

I’ve lived in fucking misery with no way out.

In the darkest of pits, drowning in myself.

“What about Taj?” I ask, referring to the newborn baby my wife just fucking had two weeks ago. The baby, and the only other reason I have hung on for so long.

“I don’t know, I haven’t been able to get close enough to Taj to find out,” Sherry cries.

“Stop your crying, Sherry. It won’t fix anything.”

“It won’t fix anything?” she screams, throwing her hands up. “My sister is fucking my husband. They have kids together. I couldn’t fucking have kids. Do you understand that? Do you even begin to understand the pain I’m feeling right now?”

I understand pain better than the fucking best of them.

This is only an extra in the pit of pain I carry around in my soul daily.