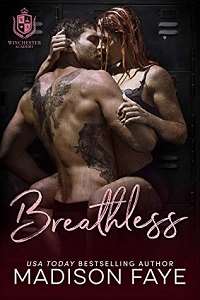 “Okay, that shit is X-fucking-rated, I swear.”

Sasha sucks on her teeth and shakes her head, her eyes looking over my shoulder as she bends over all the way to her toe. I’m facing her in the same pose—legs spread, back arched, and my hands sliding down my ankles to hold my feet—but I ease off to turn and follow her gaze.

And instantly, hot, burning heat flashes over my face and down my chest under my suit. I quickly turn back, swallowing thickly as I slide back into the stretch. But I know damn well what I just saw, just like I know I’m going to be thinking about it—no, obsessing over it—for the rest of the day. And week. And probably months.

But this time, instead of turning around to gawk and stare and, well, lust like I typically do when it comes to Camden Kirby, I force myself back into the stretch, my typically sore muscles aching in preparation for the coming practice. Sasha giggles.

“Oh, come on. You know, never having been laid doesn’t have to mean prude. You can look, you know.”

I roll my eyes in an attempt to wave her off, but she’s not having it.

“I know what he looks like!” I say with a forced laugh that I hope to God covers that burning heat on my face.

My friend sighs and shakes her head at me before glancing over at Brynn, who’s also stretching.

Hot does not even BEGIN to cover it. In fact, I’m not entirely sure there are the right words in the English language to describe how gorgeous the man Sasha is ogling is.

“My God, Waverly, will you just look?”

I know I shouldn’t. I know nothing good can from looking at him—and God forbid he sees me looking at him, today of all days. In fact, after last night, I don’t even know how the fuck I’m even at practice right now.

She grins, her eyes firmly over my shoulder. And just like that, I cave. I turn, and there he is.

Okay, that shit is X-fucking-rated.

I want to open my mouth to say something—maybe to tell Sasha to quit being weird and concentrate on warming up or something. But then, I’m just as guilty as she is. At least, my eyes sure as hell are. I feel the heat spread over my face as I watch him slide from the pool—muscles clenching and glistening as he grips the handrails to the ladder. His abs ripple like freaking liquid steel, and the huge tattoo covering the massive scars on his back rolls with his strength as he climbs out. Water streams down his body, running in rivulets over his muscles, his arms flexing as he raises them to push his hair back from his face.

I mean seriously. It’s seriously like a live-action, pool version of Magic Mike, and every single girl at practice knows it.

He turns, shoving his fingers from one hand through his hair, and when my eyes slide back down his body, my face instantly burns intensely, along with the fluttery feeling of the forbidden that teases through my core. His hand slides down his abs, his finger tugging at the waist of his black, skin-tight swimmer’s shorts—not board shorts or anything baggy like guys my age might wear to the beach or something. No, he looks like a freaking pinnacle athlete—all sleek, toned, gorgeous, muscled, and…

I swallow thickly my face tingling with heat.

“I mean that bulge!”

I giggle at Sasha, but it’s just to cover my own lusty looks as I turn back.

“Okay, stop it,” I chide without any real feeling behind it. “We need to warm up.”

Except my words fall flat as I turn and just keep staring right alongside Sasha and Brynn. At him.

“Him,” by the way, is Camden Kirby, our swim coach at Winchester Academy. Our crazy-hot, impossibly perfect, completely captivating, ten-years-my-senior-and-totally-off-limits swim coach, at that.

“If Jason Momoa, Tom Hardy, and Camden Kirby were in a room with me, and I could only fuck two of them,” Sasha says with a hungry smile. “I would fuck Coach Kirby, twice.”

Brynn giggles and I roll my eyes, my cheeks burning.

I’m trying to laugh alongside them, because I know they’re just having fun. But, it’s a little hard to “just have fun” or “just pretend” when it comes to Coach Kirby.

Not after last night.

Sasha gives me a look as she eases off her stretch and tucks one leg under and back to stretch her hamstrings. She’s wearing a new blue and silver one-piece suit that looks fantastic on her, and I’m about to try and change the subject by trying to get her to fess up where she bought it, but she bulldozes right on ahead.