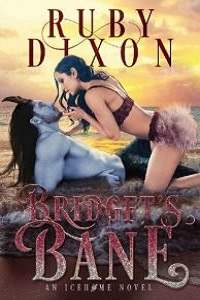 Sure, he’s the prettiest man on the beach, but he’s a terrible listener. I’ve told him a dozen times that we’re not compatible - in SO many ways - and he refuses to take no for an answer. He had his chance with me, and he blew it.

But A’tam thinks we should be mates. He thinks he can just woo me enough to change my mind. He thinks that sultry kisses and soft touches are the way to a girl’s heart. He thinks that if he shows me that he can be everything I need, I’ll just fall right back into his arms and forget the past.

Because I want him again and I really, really shouldn’t.

As we stare at the brawny, half-naked aliens near the fire, Flor leans over to me. "This beach just got a whole lot more interesting."

I have to agree.

It's been a weird month, but I've tried to adapt. First there was waking up after being kidnapped by aliens in my sleep. That was a lot to absorb. Then it was a mental adjustment to realize that this frozen, deserted planet is now my home and we'll never go back to Earth. All in all, I think I've handled it pretty well. I've had a few rough moments, some tears shed, but I'm picking myself up and moving along.

This is just how it is, I remind myself. You'll manage. You always do.

So I help out around camp. I joke around and get to know my new “village family” since these are the people that I'm going to be living with the rest of my life. There are no cities on this ice planet, no vast civilizations. There's another group of survivors intermixing with the sparse alien inhabitants, but they're deep in the snowy trenches in the mountains and it's too far a journey for us to make right now. Or so I've been told. Me, I just think they're keeping us separated to kind of suss us out. To make sure we're all reasonable and safe before they invite us home. After all, the other village has a lot of kids and they don't know us. We could be serial killers.

I don't mind, though. I'm adaptable. Always have been. It's nothing new for me to have to start from fresh. Growing up, my mother sent me to boarding school after boarding school just because she couldn't be bothered with me. So I know how to survive. I know how to ingratiate myself and be friendly and make sure that everyone's my buddy.

The whole “no men” thing was kind of a bummer, though. Especially after we were told that our khui—the symbiotic parasite we had to acquire in order to survive here—chooses our soulmate. That once the khui “resonates” in my chest (which is like a purring sound), it “finds” my mate for me and then we're happy ever after and have babies and stuff. The romantic side of me thinks that's pretty dandy…except there's sixteen women to four men.

And one of the men immediately resonates to Veronica, who's sweet but utterly unremarkable otherwise.

The two red-skinned guys are hot, but they're obsessed with pregnant Angie.

And the only other guy left? Is a monster. There's no way I'm getting near Gren, and I'm not sad when he escapes the village (except that he takes poor Willa with him).

So yeah, slim pickings. I'm told there's one guy who just recently hit adulthood in the distant mountain village. Other than that, the nearest unmated alien is a kid. Gonna be a long drought for most of us, unfortunately. At least I'm in good company with the other girls in our endless bachelorette-hood.

Which is why tonight is a big deal. Tonight, everything's changing.

Both Flor and I stare at the pack of brawny, muscular men as they file in from the beach. I don't consider myself a rampaging wild woman in the sheets, but…damn. Maybe it's the drought of available guys that makes me appreciate this visual feast. Guy after guy shows up near the fire, wearing a few furs tossed over their bodies. They've all got horns and the blue skin and tails like the sa-khui tribe do, but they seem different, too. Not in a bad way. In a sexy, appealing way. And they just keep streaming in from the rafts down the shore, with a newly returned Lauren talking animatedly to Mardok and Raahosh.

Flor leans over to me. "How is it that when we get stranded, we end up on Vagina Beach but when Lauren gets re-stranded, she gets a tropical island filled with beefcake?”

"Her luck is obviously better than ours," I murmur to my friend, watching as one particularly handsome sort moves toward the fire. He's got a beard, which is unusual considering all the sa-khui have clean-shaven jaws. His hair is long and messy, and the horns on his brow are small. He doesn't have that weird armored plating on his face or arms like the sa-khui do, and I decide I like this better. It makes him look a bit more human, even if his nose, cheekbones, and facial structure are decidedly pronounced and just as alien.