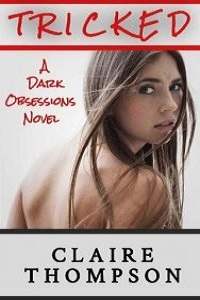 Callie flopped onto her bed around midnight, wiped out. There were still a ton of boxes to unpack, not to mention pictures to hang and groceries to buy, but she’d earned a rest.

She navigated to the site and clicked on her profile. She updated her location, a thrill of excitement moving through her for the hundredth time that week. She was in the big city and would soon start her dream job at the museum. After graduating from college and working for a few years in various dead-end jobs at art galleries in Milwaukee, her real life was beginning at last.

A quick scan of the messages showed the usual assortment of skeevy horndogs sniffing around for someone to jerk off with over the internet. Most of them could barely string together a coherent sentence. And why did men think women liked disembodied dick pics?

She returned to the front page of the DomZone site and noticed a new tab: Abduction Fantasies Explored.

The abduction fantasy page had a number of links, each one leading to a different chat room based on your particular fetish. She perused the list that catered to the Dom/sub heterosexual crowd, her panties moistening as she examined the choices.

Bought by a Billionaire

Of course, just like in the books she read, he would start out as the stern Master, but he wouldn’t be able to help himself. He would fall head-over-heels in love with his beautiful slave girl. He would lift her gently from her confines and carry her to his huge bed. He would whisper that he was as enslaved to her in love as she was to him. He would shower her with jewels and kisses, and beg her to be his forever…

Callie clicked on the link and entered the chat room. There were about a dozen people there. She watched for a while as conversations scrolled by, with people discussing various fantasies and engaging in some role play. One guy kept using all caps and shouting at every female in the room to get on her knees and worship his cock.

With a snort, Callie started to click away from the room. Just before her finger pressed the key, the pinging sound of someone sending her a private message caught her attention. She glanced at the name, surprised to see the message was from SexKitten312. In her brief time on the site, it had always been guys who tried to private message. But there was a small (f) next to the user name, which indicated a female with a submissive orientation.

“Hi, SubAngel. I noticed you’re from the Chicago area, like me! Just wanted to say hi.”

Callie clicked on SexKitten’s profile. She was female, aged twenty-seven—two years older than Callie, and was seeking a “real life Master to claim her completely—heart, body and soul.”

So why was she messaging Callie?

Not wanting to be rude, Callie typed back, “Hi. I’m actually new to Chicago, and to this website.”

“Wow, what a coincidence. I’m new to the area too. Originally from Texas. I love going to the clubs and scening with hot Doms. I can’t wait to explore the scene here in the Windy City.”

She glanced at the main chat area. The guy writing in all caps was now ordering every “sub slut” in the room to “spread her legs and show him her cunt.”

“Jeez, that dude is so lame,” SexKitten typed in the private message box. “I can’t stand guys like that. They just don’t get it.”

They chatted for a while in the private message tab, making fun of the various guys in the chat room, and sharing a little about their lives. Callie learned that Diana—her real name—had graduated from Texas Tech with a degree in nursing, and had moved to Chicago for her work and because she had family there.