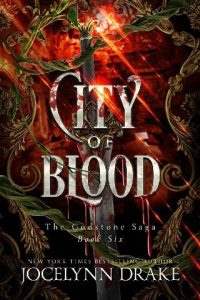 Where there is life, there will always be hope.

~Calean Talos, King of Erya and Guardian of the Godstone

This was all wrong.

He should be dead, but he wasn’t.

He should be in pain, but he wasn’t.

Every inch of his body crackled with energy, but his brain was wrapped in a fog. Nothing made sense. He barely remembered where he was or why he was there. He looked at the shocked faces of his companions, and even they felt vaguely unfamiliar.

“Cael?” Drayce started toward him, a hand outstretched. Caelan took an unsteady step backward, maintaining the distance between them. They couldn’t touch him. That felt…dangerous.

Drayce stopped, worry twisting up his features as he dropped his hand to his side. “What do you mean, you think you’re a god now?”

“I don’t know. I…” He stopped and turned his questions inward.

What did you do to me? he demanded of the gods.

But there was no answer. For the first time since he’d bonded with Kaes, he felt alone. Completely and utterly alone. The space the gods and goddesses had occupied for nearly a year was an empty theater.

“What did you do to me?” he screamed, his voice echoing off the high walls of the cave.

“Caelan, please remain calm,” Rayne said, but there was a tremor in his voice. As if he were afraid for Caelan. Or maybe just afraid of him.

“Drama queen.” Nyx sighed. Not in his head, though. Close.

Caelan whipped around to find the God of Time standing a few feet away, tugging at the cuffs of his shirt and peering about the cave with an air of disdain.

“You should be thanking us. This is a far better existence, wouldn’t you say?”

“You lied to me!” Caelan roared. He threw out his hand, and it was instantly filled with the hilt of his sword. With another shout, he charged the Dead God, aiming to cleave his head from his neck.

Nyx glared at him while calling forth his staff. He blocked Caelan’s blow and the six others that quickly followed.

“You lied to me!” Caelan ranted between the shower of purple and white sparks. “Was this about getting free of the godstones? Was it ever about stopping Zyros? You got me fucking killed!”

“And now you’re a god. Why aren’t you more grateful?” Caris murmured.

Nyx knocked Caelan away from him, and a ring of flames instantly snaked around him in a circle, while the Goddess of Fire walked up to slide an arm through Nyx’s.

“Well, really, he’s just a little godling,” Nyx corrected with a condescending smile. “If he’s careful, he might one day grow into a true god.”

Caelan glared at both of them as he strode through the flames, the scorching heat nothing compared to his rage. “I don’t want to be a godling or a god. I want my life back.”

How could he forget? Lore killed him. He’d slashed his throat and stabbed him through the heart, ending his life.

But that wasn’t the first time he’d died. The other two times had been the doing of the God of Time.

Again and again, they’d robbed him of his life, controlled him like a fucking puppet, because this was nothing more than a game to them. His life and the lives of all the people of Thia didn’t mean anything to them.

With another scream of frustrated rage, Caelan launched himself at the duo. But he didn’t get more than a couple of steps when the gods lifted their hands and he was hit in the chest with some unseen force. He was thrown across the cave.

He landed hard, all the air leaving his lungs while pain erupted throughout his frame. His sword was jolted from his hand and slid wildly across the rocks.

Caelan rolled to his side and was pushing to his feet when Drayce appeared next to him, wrapping arms around him. He placed his hand on Drayce’s shoulder, preparing to push him away, but his lover pressed his forehead to Calean’s head, his desperate pants brushing against his ear. A damp trickle of warm tears kissed his cheek and Caelan froze.

He didn’t know if it was Drayce’s touch, the sound of his voice, or the combination of the two, but it was as if his lover had punctured his bubble of anger. All the blind rage steadily drained out of him, and he blinked. Pieces of himself—his old self—fell into place.

Enormous, tear-filled emerald-green eyes watched him, begging him to stop fighting with the gods. To just stop and stay safe for five minutes.

“Drayce?” Caelan choked out. The loss of the fiery anger left behind confusion and a hollowness where his soul had once been.

“Right here,” Drayce said, flashing him a crooked grin while dislodging a couple of tears. “Not going fucking anywhere without you.”