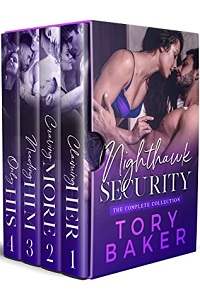 To the two brightest lights in my life, Adrienne and Andrew. You two are my biggest fans and always seem to help me name these crazy characters.

I fist my hair at the back of my head. This is not how I wanted to start my Monday morning. “Fuck,” I grunt, pacing back and forth in my office. I knew her from the pictures Travis carried with him. It was one where she was hugging her older brother, but proud as she could be of him too. Hell, if they skyped while we were overseas, I caught a few glimpses of her, and sometimes she’d say hello while a blush appeared on her cheeks. She even sent a package to all of us with a note attached that there was something just for me, something Travis grumbled about; he didn’t like it one bit. I couldn’t blame him. His sister, shit, she was beyond gorgeous. Yet, she was way the fuck out of my league. Getting those glimpses, though left a lasting impression.

That’s why when I came into Nighthawk Security, a place where me and my brothers built it from the ground up. Easton, Bridger, and Drake, they may not have the same blood running through their veins as mine, but they’re more of a family than anyone could ever ask for. Through thick and thin, we’re brothers ‘til the motherfucking end. Travis Daniels, though, that insane son of a bitch is still over there. It causes a chill to run down my spine to think of what he’s doing and the shit that still goes on that no one hears about.

I sit back in my desk chair, returning to the e-mail I received, and shake my head. This is not going to be a good start to the week. Not to mention for Taylor one of the things I remember about her vividly is how strong-willed she is. There were times when Travis was ready to wring her neck over the phone, and she refused to take hand-outs. That’s why I know I’ll be returning his message. I made a promise to Travis when I came back stateside while he decided to continue on with even more tours. Knowing him, he’ll get his full twenty years in and retire after that. It leaves me to look after his sister, Taylor, which is something I’ve already been doing without anyone knowing, especially her. If she ever found out, she’d probably kick me in the balls, and I like them too much to let that happen. So, I kept my distance and watched her from afar, even when I wanted to be right there with her.

Now all bets are off. Taylor Daniels doesn’t have a choice; I’ll drag her into my office kicking and screaming her cute little ass off.

Once I reply to Travis, I walk out of my office. I may as well let Bridger and Drake know what’s going on. I’d have Easton doing the lead on anything he can find, but the asshole up and moved from Virginia to hot as hell Alabama. Why he chose that state, I’ll never understand. Though he and Cam seem to be happier than ever, something he always rubs in our faces.

I make my way into the conference room, where we have our weekly Monday meetings. “Ready to rock and roll?” Bridger asks as I walk in.

“It’s Monday. Who had rainbows and glitter for breakfast this morning?” I question, my eyebrow shooting up in response.

“More like who pissed in your Cheerios?” Bridger grumbles back before taking a seat. I go to the coffee maker we have set up in here, make a steaming cup of the strong black magic.

“Please tell me that’s not the stack we need to go over?” Drake comes in, draping himself in a chair.

“Afraid so. Not only that, but I’ll be taking on a personal assignment.” I sit down in a chair, doling out the cases we need to get sorted and taken care of. For the most part, we can pick and choose.

I hear a whistle come from Drake. “Like we didn’t see that coming from miles away. Travis has had you on her six for three damn years. What’s wrong that we’ll be bringing her in?”

“That’s the kicker. I have no idea except he sent an email to my private email account saying Taylor needs help as soon as possible. I’ll be heading out after our meeting. I may need to see what Easton can do if you two boneheads are busy.” I feel my age a little more every day, but taking this case, it’s not going to be easy in the least, it may push me to my limits.

“We can work on hacking into her accounts while you’re with her. It looks like we have an easy caseload, and we can hand off some of these to Leo,” Bridger says.