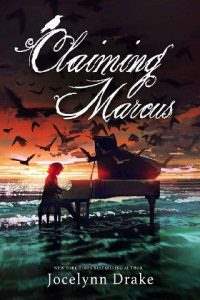 Marcus leaned his forearm on the mantle, staring down at the cold, empty grate. From the hall, he could hear the insistent ticking of the grandfather clock as if the damn thing was counting each of the final seconds of his life with a steady determination.

The rest of the house was silent. The few servants he dared to keep around were still asleep in their beds at the top of the house for another couple of hours. His youngest brother, Winter, sat in the dark leather wingback chair close to the window, turning a gold coin over and over again between his fingers. Its shiny surface would catch and toss out flashes of light, but he paid no notice. His gaze was locked on a distant point Marcus knew was not in the room.

One of his other brothers, Beltran, was reading a dusty science tome, seemingly oblivious to the fact that their lives were balanced on a razor’s edge. Tonight, everything was changing for them. Very likely ending.

The door to the library opened and Rafe, Beltran’s twin, returned, his violin and bow clutched tightly in one hand. The hair at his temples was slick with sweat, and he looked a little pale, but his ever-present smirk twisted his lips. Marcus straightened from the mantle and Beltran closed his book, his quick blue eyes sweeping over his brother.

“None other than I plan to ram my bow down Bach’s throat when I finally meet him in Hell,” Rafe muttered. He carelessly dropped his violin and bow in a chair as he marched over to a sideboard. He opened a crystal decanter and splashed some whiskey into a glass. “I’m so bloody sick of Bach.”

“Did you ever consider playing some Mendelssohn or maybe Vivaldi for her?” Winter inquired.

“Yes, I’ve bloody tried Mendelssohn and Vivaldi. Do you take me for an uncultured hack?” Rafe snarled at his little brother.

“Yes,” Winter said with glee in his voice.

Marcus pushed away from the fireplace and stepped into Rafe’s direct path, toward Winter, his drink forgotten in his clenched hand. He used his bigger frame to block Rafe’s view. Rafe’s usually elegant appearance was a bit rumpled, with a starched white tie hanging limp and the top of his shirt open, exposing his slender neck and perfect pale skin. His longish dark hair was in wild disarray about his head. The ribbon he used to hold it back now missing. For all his foppish ways and strict adherence to the latest fashion trends, Rafe’s body vibrated with hidden power and strength. Rafe was a bit taller than Marcus with a leaner frame, but Marcus could still handle him if necessary. They’d all grown up having one scuffle after another.

Fights were inevitable with four brothers relatively close in age, though bookish Beltran was the least prone to pick one. Winter, on the other hand, seemed to revel in his ability to get under Rafe’s skin. But then, Rafe loved to talk down to his baby brother, even though there were barely four years between them. And Marcus remained the perennial peacekeeper whether he wished to be or not.

“This isn’t the time,” Marcus snapped.

Rafe’s lips twisted into a mocking grin, and he lifted his glass in a salute. “Why not? This could be our last chance.”

“Is she asleep?” Marcus questioned. He refused to acknowledge Rafe’s comment, even if he had been thinking it only moments earlier.

The sneer returned when he lowered his drink. “Yes, Mother is asleep.”

“Tonight’s hunt?” Beltran asked. Marcus could almost imagine him pulling out a bit of parchment upon which to make a note for his scientific journals.

“Fine.” His tone was a little less harsh when talking to his twin. Rafe turned away from Marcus and approached the chair that held his violin and bow. Placing his glass on a table, he picked up the instrument, showing more care now than when he’d entered the room. “The hunt was uneventful. She seemed at ease tonight. Though she’s getting faster—there were a couple of times I was hard-pressed to keep up with her.”

“Did she draw anyone’s notice?”

Rafe sat in the chair, his fingers sliding over the polished surface of the violin in a gentle caress. “Not that I saw. Dinner survived, though they may wake up a little worse for wear come morning.”

“Then the timing is right. We must act tonight. This quiet spell will make it easier for her to accept the change,” Marcus said.

Rafe snorted. “Except we never know how long her quiet spells will last. Tomorrow night she could wake in another of her black moods.”

“You’re also assuming that this will work at all,” Winter added.

“We need to decide.” There was a soft clinking of a chain and a click as Beltran opened his pocket watch to check the time. “Aiden should be here any minute now.”