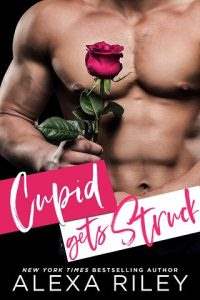 Astrid is finally back home after finishing culinary school and ready for her first job interview. There’s something familiar about her new boss, and it’s pulling at her heartstrings.

Cupid has been biding his time until Astrid graduated and returned to her hometown. Armed with an empire he built just for her, he’ll finally confess that’s he’s been there all along.

Warning: This Valentines quickie is sugary sweet and ready for you to take a bite. Find out what happens when Cupid finally claims his love.

BONUS - This book gives you THREE Valentines Romances! Grab this bundle with our previously released favorites - Locked Up Love & Be Mine Or Else - for a limited time! Valentine's Day was never so satisfying!

“Are you sure Nicky can’t just hire you permanently?” Star asks, taking another bite of the lemon meringue pie I made. She is a hundred percent not kidding, and I adore her. She is my second-biggest fan behind my brother, and I love them both to pieces. They make me believe I might have a fighting chance out there in the world. Them and my best friend Cupid. Though he’s never actually tried my sweets before.

A lot of people think lemon meringue pie is a hard dessert to make, but it isn’t. Not to me, at least. I find one of the most valuable traits as a pastry chef is patience. You can’t rush perfection, and you can’t take your eyes off it either.

“I’ve appreciated the temp work, but finance really isn’t my passion.” I laugh. “You want my brother to hire me as his own personal pastry chef?”

“I mean, I’m sure I’ll be pregnant soon. I’ll need lots of sweets.” She goes for one of my eclairs next. She really does love everything I make. So much so that she had me make their wedding cake.

“This is how I pay my rent at the moment. I'm already kind of hired here,” I point out, motioning around the kitchen. The place looks like a dessert bomb exploded in it. I might be able to bake, but I always leave a messy trail behind me.

There isn't much counter space, which is ridiculous because while this kitchen might be a personal home one, it’s bigger than some people's apartments. I’ve completely taken over the kitchen at this point, and my brother has never minded before. Now I’m thinking that’s going to start to change. Not only has Star moved in with him, but they also got married a few weeks ago.

They’d only recently gotten back from their honeymoon, and I’m really starting to feel out of place. I don’t want to be their third wheel. I also don’t want them to have to sit me down and talk to me about finding my own space. That rejection would burn, and even knowing they would be right to ask for it, I don’t want it to get to that point.

When my brother Nick told me I could stay with him after I graduated culinary school, he’d been a workaholic that was never home. Things have most definitely changed in the short time since he found his Star. I love them together, but I’d be a liar if I didn’t admit I was a bit jealous of what they have.

Nick isn’t my blood brother. We grew up in the foster system together, and he always kept a close eye on me even when he’d aged out. He’s the only real family I have, and it’s scary to think it could slip through my fingers because he’s starting one of his own now.

I’m sure Star’s right, and in no time she’ll be pregnant because they can’t keep their hands off of each other. I want that so much for them, and they both deserve it, but I’m not sure where my place is anymore. I do know it’s not inside their home and I need to find a place of my own, along with a job.

He goes straight for Star and kisses her long and hard on her mouth. I turn away from them, not wanting to intrude more than I already am.

“You taste delicious,” I hear him say. I start to slip from the kitchen, but my brother calls me back. “You don’t need to go.” He smiles my way, which is something he does more often now.

“I actually do. I need to get ready for my interview. I promise I’ll clean up when I get back.”

“It’s fine, you know that,” Nick tries to reassure me.

“I’ll see you guys later.” I give them a little wave before I head back toward my bedroom to get ready for my interview—my very first interview. I still haven't told my brother who the interview is with. I danced around the question when he asked once before.